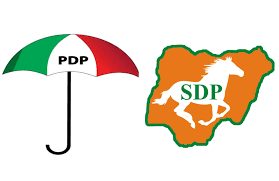 Stakeholders of Osun State Chapter of Social Democratic Party (SDP) led by the Pioneer Chairman of the party in the state, Chief Ademola Ishola have resolved to vote for the Peoples’ Democratic Party (PDP) presidential candidate, Alhaji Atiku Abubakar.

Ishola in a statement in Osogbo on Thursday, February 14, 2016 disclosed that foundation members of the party from all the 30 local governments met at the Old Party Secretariat, Fakunle area, Osogbo on Wednesday, February 13 and resolved to vote en-mass for Atiku in the Saturday’s presidential election.

According to him, majority of SDP members and in particular old party supporters had no pact with the All Progressives Congress (APC) in the state and were not involved in any coalition agreement with the ruling party.

He stated that the party was faced with a situation where some people who were never part of the vision of SDP and those who lacked ideals of what it stood for “garbage-in and garbage-out” of the party.

“For instance, former deputy-governor of Osun State, Iyiola Omisore and his supporters came to our party in April last year and you will recollect how they caused several trouble for us. He spent less than six months and now he is out again. The crisis Omisore caused for us is yet to be fully resolved.

“We have decided to save our party in the state. We will support our members who are contesting in the forthcoming election, but we have directed all authentic members of SDP to vote for Atiku and for PDP where we have no candidate.

“We resolved to do that because we are of the opinion that we cannot continue like this. Killings, hungers, unemployment, nepotism and suffering in our land cannot be allowed to continue. We have painfully listened to Atiku and we feel very strongly that he will make a change.

“Today, Osun workers and retirees are being owed over 16 months salaries and pensions. The effect of this can be seen everywhere in our state. We need to kick APC out of the state and at the national level. Voting for Atiku is the best option for us since our party was unable to resolve its presidential candidate’s matter”, he stated.

Ishola called for peaceful polls, predicting a landslide victory for Atiku in the state, adding that many people will vote for the presidential PDP candidate.