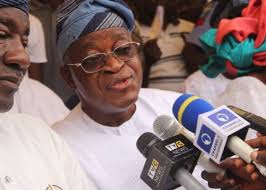 Osun state Governor, Mr Adegboyega Oyeola today said that state would begin the implementation of Ohio Insurance this month to facilitate accessible and beneficial healthcare to the people.

The Governor said this at the 2019 Workers’ Day Celebration, held at the Osogbo City Stadium.

The Secretary to the State Government, Pince Wole Oyebamiji; Chief of Staff to the Governor, Dr. Charles Akinola and Head of Service Dr. Olowogboyega Oyebade were also at the event.

The Governor noted that the workers in the state had displayed competence and pulled their weight as the genuine engine room of the government.

a�Z Oyetola said: “For these and more, I commend and celebrate the workers for a display of unparalleled commitment, industry and patriotism that are in tandem with the 21st  Century competitive world.

“The conduct and character of workers have further given vent to the reputation of the state as one of the most peaceful states in the nation”.

a�ZGovernor Oyetola pledged his administration’s commitment to improved welfare for all categories of workers in the state.

He said his administration had been working assiduously to ensure equitable distribution of resources and services to achieve sustainable and competitive development.

“It is the resolve of this administration to give improved welfare to workers from time to time, the little we have been able to provide during this period of economic crunch is proof that we shall sustain the tempo as our plans bear fruits and the fortune of the state continues to look up.

“In the health sector, we are revitalizing nine General Hospitals and 332 health centres, one per ward, to ensure quality and adequate healthcare.

Call NNPC Cabals To Order Before We Are Provoked, IYC President Tells Buhari

4 thoughts on “Osun to begin implementation of Health Insurance Scheme”