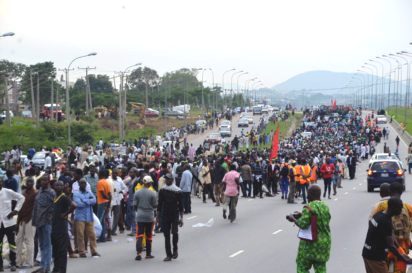 The Islamic Movement of Nigeria (IMN), or Shiite Group, has alleged that about 50 of its members were killed on Monday along the Nyanya-Keffi expressway by officials of the Nigerian Army.

A member of the group, Mohammed Gamara, who spoke with Channels Television in Abuja said this, noting that about 200 others were injured.

“So far, I don’t have the exact number of the casualties and the martyrs but if we say they are more than 50, killed by the Nigerian Army, I don’t think I will be exaggerating,” Gamara said.

A witness told Reuters news agency that the military shot at the protesters who were demanding the release of Cleric Ibrahim Zakzaky.

“The security agents attacked members of the IMN when they were in the procession coming into Abuja,” Musa told AFP.

“People were killed definitely,” said Musa, who was not at the procession and could not give a death toll.”

“We don’t carry arms on our procession, we don’t block roads … the security agents have decided to shed our blood,” he added.

The group says Zakzaky must be freed after a court ruled his detention without charge illegal.

On Saturday, the military shot dead three Shia followers during a similar confrontation on the outskirts of Abuja.

According to the army, soldiers transporting weapons and ammunition were “attacked” by group’s members – an account the IMN “categorically refutes”.

The group members had established an “illegal roadblock denying motorists free passage” and when the military tried to clear the barrier they were met with “stiff opposition”, army spokesperson James Myam said in a statement on Sunday.

Soldiers opened fire on the IMN members after they “pelted the troops with stones” and attempted to “cart away the ammunition and missiles the troops were escorting”, the statement added.

Zakzaky has been jailed since December 2015 when security forces killed hundreds of members of his group in a crackdown on the group.

Rights groups have accused Nigeria’s military of killing more than 300 IMN supporters and burying them in mass graves during the 2015 confrontation, a charge the army strongly denies.

The cleric, who lost an eye and was left partially paralysed in the violence, has been at loggerheads with authorities for years because of his call for an Iranian-style Islamic revolution. – Al Jazeera.

Nigerians Are Succeeding Inspite Of Government, Not Because Of It – Richard Quest