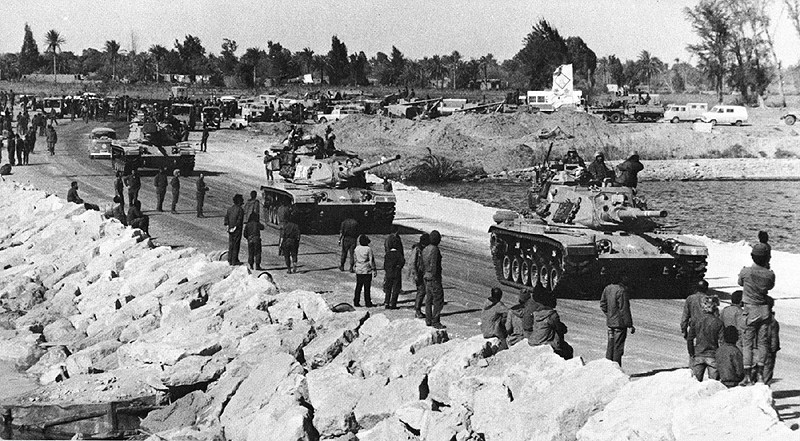 It is almost certain that US president, the choleric Mr. Donald Trump, has not heard of the 1973 Arab-Israeli war, otherwise referred to as the Yom Kippur war. Beyond his sheepish love for Israel, it is unlikely that Mr. Trump, like most of his predecessors, knows a thing or two about the dynamics of the Middle East crisis. Otherwise, Mr. Trump would have been a bit circumspect in his hasty declaration of Jerusalem as the capital of Israel.

Mr. Trump does not even seem to know of the centrality of Israel in World War I and World II! Of course, the Balfour Declaration which was signed in 1917, barely one year to the end of WWI, was a landmark event in the conspiracy to establish a state of Israel just as the alleged extermination of six million Jews by the Nazis was the excuse the United States needed to detonate the first weapon of mass destruction on innocent residents of Hiroshima and Nagasaki after its belated decision to join the war.

This year marks the 45th anniversary of the Yom Kippur war. And, with an eccentric in the mould of Mr. Trump so close to the nuclear buttons, the unquestioning and bizarre love for Israel could just have provided Mr. Trump an excuse to lead the world to WWIII. In any case, Mr. Trump never believed in the two-state solution (as if he believed in anything, anyway!) as a way out of the quagmire in the Middle East. Mr. Trump simply raised the normally-high temperature of the Middle East the day he shredded the 1990 Oslo Peace Agreement by his unilateral declaration of Jerusalem as the capital of Israel.

Left to Washington and Tel Aviv, the idea of an independent state of Palestine exists only in the imagination of its proponents. And, while the criminal Israeli occupation of Palestinian land goes on, successive occupants of the White House and their carbon copies in other western capitals, desirous of arming and sustaining a strong ally in the Middle East, turn the blind eye and continue to delude themselves that the 1990 Oslo peace agreement that birthed the two-state solution is on course. This was an open invitation to radical elements to take the initiative.

It is important to put the Arab-Israeli conflict in its proper historical perspective. Officially, the state of Israel came into being in 1948 but truth is Israel had been a de facto state three decades earlier when it was decreed into existence by the letters of the Balfour Declaration in 1917. The events of 1948 were mere formalities because Ben Gurion and his ultra-right fellow travellers in World Jewry never folded their arms to allow a so-called negotiated settlement to go on, as the West (read, United States) is today telling the Palestinians.

Had Jewish terrorist groups listen to Britain and other Western powers and, in a sense agreed to be led by the nose, chances are there would have been no state of Israel in 1948! Like todaya��s terrorists in the Middle East, Israeli terrorists took up arms, organised themselves into death squads, launched deadly terrorist raids ever known to mankind and killed UN envoys who were on fence-mending missions to the Middle East. The struggle for the creation of Israel was not a tea party; it did not come peacefully.

The Jews had to bomb, kill and virtually rendered Palestine ungovernable in their struggle for a homeland. In fact, for every Hamas and other militant Palestinian group the world knows today, the Jews had their terrorist Irgun and Zvai among others. In fact, it was the bombing spree of Israeli terrorist organizations that forced the hands of the British, who exercised a United Nations mandate over Palestine, to accede to the creation of the state of Israel in 1948.

Right from the onset, not many gave the Oslo peace agreement which recommended a two-state solution any chance of success. But, crazy and awkward as it sounded, even the most incurable pessimists within and outside the Middle East, were prepared to give the idea a chance. It never took long for the world to realize that the two-state solution was a fluke; another unimaginative invention by the United States of America to buy time for her lapdog.

Of course, the world knows too well that had Ben Gurion and his band of Zionist land grabbers fallen for the sweet talk of the British, they probably would still be wandering in Europe, homeless like the Gypsies, and not as lords of the manor in the Middle East. Hamas and others are aware that what is left of Palestine today would further shrink and could disappear within the next decade, going by the ongoing criminal land grabbing policy of the Jews, if they choose not to emulate the fighting Jews of the early twentieth century!

It sounds odd, but the stark reality that Palestinians are faced with is that no amount of hours spent around negotiating tables will give them a home! In the face of this reality, fighting remains about the only option available to them if they are to reclaim their land and erase the racist vie in certain quarters that Palestinians are an invented people.

The Palestinian question does not lend itself to easy resolution. One year after late Egyptian president, Anwar Sadat, defied the Arab world to sign the 1979 Camp David Accord, a unilateral peace agreement with Israel, Professor Ibrahim Gambari, then of the Department of Political Science of the Ahmadu Bello University, Zaria, and later of the United Nations took one long look at the peace agreement and concluded that it was incapable of bringing a�?Salaama�� to the Middle East.

As a mark of how wrong President Sadat was, and how right Professor Gambari was, Sadat was killed by his own soldiers in 1981 while reviewing a military parade in Cairo. Nearly four decades after Sadata��s misadventure, the prospect of the Salaam he boasted of, and for which he paid the supreme price, is fast receding. In the years since the Camp David peace agreement was signed, Israel has forcefully grabbed more lands from the Palestinians; killed, maimed and impoverished more Palestinians and turned what remains of Palestine into a virtual prison.

It is convenient for the world to watch and applaud as Palestinians get increasingly boxed into a small corner in their homeland with Israeli soldiers regularly breathing down their necks. With the ferocity and speed Israelis are evicting Palestinians from their homes, it wona��t be long before Tel Aviv and Washington succeed in implementing a 21stcentury a�?final solutiona�� to the Palestinian question. It is convenient today for Israel to forget that, eighty years ago, the world rose against Adolf Hitler in his a�?final solutiona�� to the Jewish question. In defence of their Jewish cousins, Arabs too joined the campaign against Hitler.

One year after the Yom Kippur war, Yasser Arafat, chairman of the Palestine Liberation Organization, PLO, told member-nations of the United Nations General Assembly that he attended the session bearing an olive branch and a freedom fighters gun but ended with moving appeal: a�?Do not let the olive branch fall from my hand.a�� Forty-five years on, the international conspiracy to squelch the Palestinian dream has encouraged more radical groups to switch olive branches with guns! Were they given an option? No!

Reason: Any hope of Palestinians brandishing olive branches has consistently been dashed by Israeli soldiers and illegal settlers who regularly uproot olive trees, a common plant in occupied Palestine.