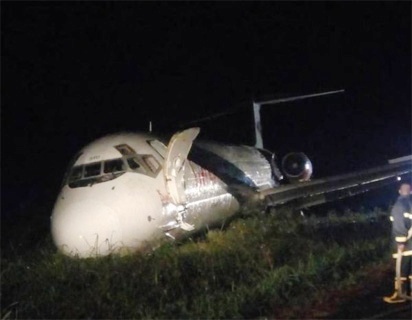 A passenger jet carrying over 80 passengers came within metres of plunging into the bush after it skidded off the runway as it landed at the Port Harcourt airport in Rivers State.

Panic spread through the Dana aircraft with number 9J0363, as it stopped at the edge of the bush a�� with its nose dangling precariously.

a�?The incident was suspected to have been caused by heavy rainfall, which was accompanied by strong wind and storm in Port Harcourt, according to the GM, Corporate Affairs, Federal Airports Authority of Nigeria, Henrietta Yakubu.

The Federal Airports Authority of Nigeria also confirmed that all passengers were safely evacuated.

Bishop Mike Bamidele to Christians, Pave way for holy spirit in your lives