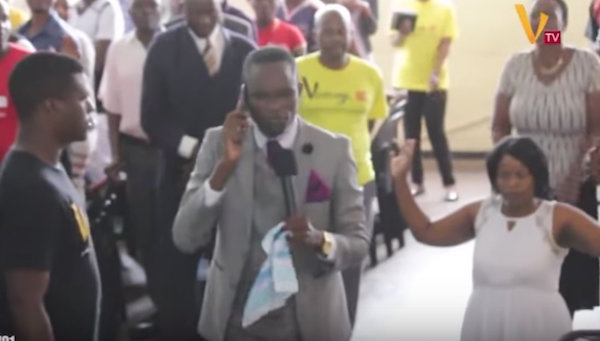 A Zimbabwean pastor has filmed himself receiving a phone call “directly from God” during a church service.

Pastor Paul Sanyangore from Victory World International Ministries Church was filmed “speaking to God” while pacing back and forth during service in March while a female member of the congregation knelt down in church.

“Hello‚ is this heaven?” the pastor asks as the congregation look on in disbelief.

“I have a woman here‚ what do you have to say about her?” the pastor asked ‘heaven’.

At one point the pastor asks on the phone‚ “what else papa God” he then relays another message to the woman on her knees.

“God is telling me to ask you why he is showing a heart”.

“He is saying we should pray for your children‚ two of them … He is saying one is epileptic the other one is asthmatic.”

The pastor screams “heaven is online”. He ends off the phone call saying to the woman‚ “Your story has changed”.

In an interview with Bulawayo 24, the pastor said that he would soon share God’s number so that anyone could call him.

Cruelty: Details of how a houseboy killed his naval offer boss, girlfriend

Ganduje Vows To Sue Wike Over Alleged Demolition Of Mosque

11 thoughts on “Pastor ‘calls God on phone’ during service (VIDEO)”