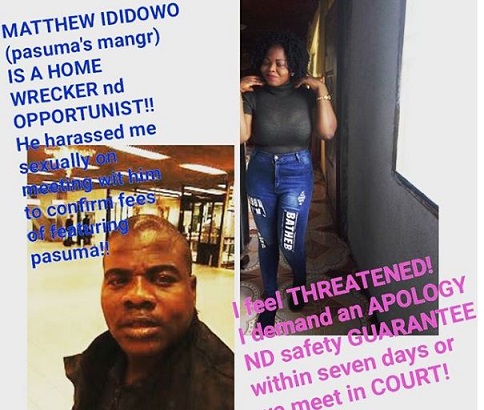 If news making the rounds about singer, Pasumaa��s manager, Mathew Ididowo, is anything to go by then he might be heading for serious trouble as he has just been accused of sexual assault.

Mathew was recently accused by singer, Olabisi Olatunbosun, who happens to be a singer of sexual assault after she had approached him to enable them discuss on fees to feature the singer on her music remix.

According to her, a�?Dear Nigerians pls I need ur help on this. This guy @matthew ididowo (alh pasuma’s manager) has definitely been doing this for long but he has messed with the wrong person cos I won’t be quiet on this. I didn’t want to say this out but my life and safety is at stake that’s part of d reason I had to post late coz I’m having a sleepless night , I went with one of my big mummies @alhaja S. Gold(one of d biggest Alaba int’l marketer ND 1st to invite pasuma to ojo town) to Pasuma’s office at Omole so as 2 meet on d fee 4 d ft of alh pasuma 4 remix of my song(figagbaga) we were later made to know that alhpasuma was busy with some impromptu meetings and we might not see him that day so someone was sent to come pick us to where MATTHEW IDIDOWO was so we can seal deals with him as the other marketer we picked while coming too also came for business.

a�?As expected, the three of us went together. when we got to where Matthew was, we greeted him and he hardly responded though that seemed normal there were quite a number of people (mostly male) there since it was a site .since he won’t give audience privately, we started stating our reasons of visit. I explained that I wanted a duet/collaboration with Pasuma and the first thing he said was “what’s the colour of my underwear ‘I felt offended but still kept my cool and cautioned him that I was a married woman and I don’t take such talks for fun. He said my marriage is bull shot and my ring is fake. He laughed and mocked me in the midst of all the men and said ‘PASUMA”will never sleep with someone like me more than once that I should take my pu**y elsewhere .he laughed again still making jest of me and said ita��s a must either I like it or not he’ll get a particular ‘kazeem” to sleep with me by all means and he will give me 400k. Alhaja S. Gold too cautioned him and he insulted the woman, and he told me to watch my back that Kazeem is coming for me. I left, I FEEL SCARED, PLS TELL HIM 2 PROVIDE D KAZEEM (cos I don’t know him) apologize ND assure my safety within 7 days or we meet in COURT! I Respect ‘alh Pasuma” a lot as a father thata��s why I’m a bit patient now cos he’s not aware of what MATTHEW did. But I’ve contacted my Lawyer cos I fear for my LIFE ND WOMANHOOD!!a�?

Kenyan Socialite, Sheila Wetangula calls out Nigerian friend who stole “what is hers”

Some Men Don’t Know the Value of a Good Woman…Actress, Ayoola Kikelomo