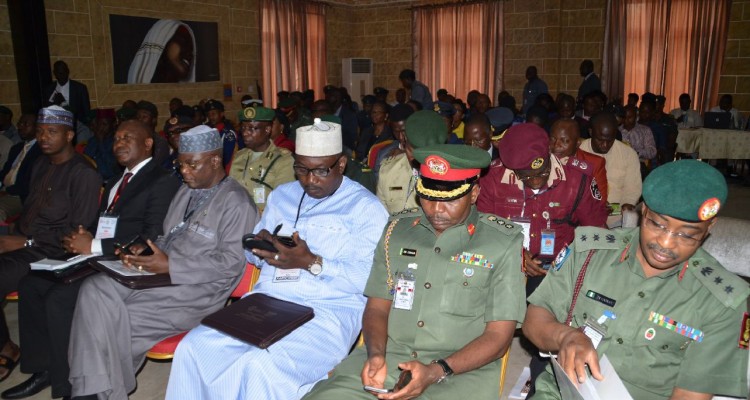 An NGO, Centre for Crisis Communication (CCC) Abuja has called on both public and private media practitioners (print, electronic and online) and information officers of security agencies to be always careful and conscious of reporting conflict sensitive issues that affect the people and society in their communications by trying as much as possible to avoid sensational and biased reportage, especially in reporting boko Haram insurgency in the North East of Nigeria.

The Executive Secretary of the CCC, Air Commodore Yusuf Anas (Rtd) made the call at a 3-day training workshop on conflict sensitive cimmunication for the medua and informatuin inducers of society and response agencies in the north east of Nigeria,.

The workshop which was tagged, “Appraising the Role of Conflict Sensitive Communication in Addressing Violent Extremism” was organized in Maiduguri, Borno State by the Presidential Committee on the North East Initiative (PCNI) and facilitated by the Centre for Crisis Communication held at Barwee Luxury Suites, Kano Road, Maiduguri.

The training workshop had in attendance, media editors and reporters of print and broadcast media from the North East and PROs or information officers from the Nigerian Army, Nigerian Air Force, Nigerian Navy, Nigeria Police Force, DSS, NIS, NSCDC, NCS, NPS, JTF, NUJ, NOA, University of Maiduguri among others.

Anas further said that the sensitivity of the crisis situation in the region demands utmost careful, caution and objectivity in handling or managing Information that goes to the public in order not to ignite tension or aggravate the situation that could degenerate to another ugly situation.

a�?In view of the fragility of the situation, it is incumbent on reporters and other stakeholders in crisis communication to be conflict sensitive by way of understanding the context of the conflict of each crisis situation.

a�?The aim of this workshop is to assist the target participants to be better equipped with a new understanding of the importance of conflict sensitive communication in managing security information at their disposal.

a�?It is expected that at the end of the programme, participants will go back to their bases, better equipped with the capacity to leverage on their new understanding of the importance of conflict sensitive communication in crisis communication to manage information at their disposal.

” For us at the Centre for Crisis Communication, we will continue to offer our professional services to PCNI and other agencies of government in order to ensure a better and more effective crisis communication in our countrya�?, he concluded.

The Vice Chairman of the Presidential Committee on the North East Initiative (PCNI), Alhaji Tijjani Tumsa urged the media editors and reporters to prioritize national cohesion, peace and unity in their reportage.

He stressed that the essence of the workshop was to assist those who manage or disseminate sensitive security information to understand the best ways possible in handling and managing sensitive information in order not to aggravate or escalate the already fragile security situation in the North East.

According to him, the training workshop was one of the PCNIa��s high Impact programmes for the restoration of media assets and building the capacity of the media in the North East while pointing out that, media practitioners and PROs of security agencies should always consider national interest first in their reportage and press releases instead of personal interest in reporting sensitive issues that affects the society by being neutral, objective and balanced.

At the Headquarters of Operation Lafiya Dole, the team was received by Gen Nicholas who expressed delight at the visit and requested the Centre to help the military in changing the narrative about the fight against terrorism in Nigeria.

According to him, people need to understand that it is not a fight between the military and the enemies; it is a fight for everybody against the enemies of the country.

He decried the lack of commitment on the part of some agencies of government who have wittingly or unwittingly, abandoned the battle for the military.

In his response, Air Commodore Anas (rtd) thanked General Nicholas for bringing a lot of pragmatism and dynamism to the operation to rid the North East of terrorism.

a�?We are pleased at your pace and commitment. We are open to collaboration and partnership with the Operation Lafia Dole and hopes to offer our assistance whenever it is needed.”, Ana’s said.

At the Shehua��s palace, CCC conveyed its appreciation to the Royal father for his courage and steadfastness in the face of the unrelenting attacks on his Kingdom by the Boko Haram terrorists.

Speaking on behalf of the CCC, The Executive Secretary, Yusuf Anas praised the Shehu for standing up against the rampaging terrorists for his people.

On his part, the Shehu thanked the visiting team for finding time to pay him a courtesy visit and expressed his confidence in the ability of the present government to bring lasting peace to Borno State and the entire North East region devastated by the Boko Haram tragedy.

36 thoughts on “PCNI Organizes Training Workshop For Media Practitioners, Information Officers of Security and Response Agencies in the North East in Borno”