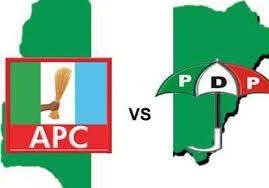 On May 29, 2018, the ruling All Progressives Congress (APC) will be three years in power; that is to say that it will be three years in its leadership of the federal government of Nigeria. By extension, the APC also controls the states with 24 states of the federation and over three-quarter of the local governments. Three-quarter of the 774 local governments (constitutionally recognized) is approximately 580. That is, indeed, a massive control. That was comparatively what happened during the era of the Peoples Democratic Party (PDP). I think the PDP had more control during its first two tenures between 1999 and 2007. By then, it was as if Nigeria had become a one-party state.

Though interested, I hardly have time to watch football matches, except when any match coincides with my prepping or relaxation times. But I want to borrow some features in the football world to drive home some points, especially considering the title being discussed. After all, politics is like a game where the key players hardly have permanent enemies or friends due to the possibility of meeting severally in other places of mutual interests. And in Nigeria, historic facts show that the key Nigerian politicians since the creation of Nigeria in 1914 have made the country like a football match played by themselves or bequeathed to their children, grand children and unconditionally their great grand children a�� generation to generation; three or more in succession. Recall that the big generals of the Nigerian army have mastered the country through chess-game and it has been very difficult to pull them out of Nigeriaa��s politics. That is by the way.

A football match is made up of a 90 minutesa�� play. Within this period, a lot of actions are displayed or play out themselves. Some of the actions please some people on one hand and irritate others on the other hand. There may be quarrels, extremism and tactical offences during the match. In short, it is correct to describe a football match as a war without weapon. There are cases when players lose control and degrade below the animals. There are cases when footballers die in the field, after the match or go home incapacitated not to ever play again in life. There are cases when spectators or fans lose their lives from the effects of the matches or from personal circumstances. Definitely, the ultimate target of the match and the players is goal(s).

But there is always a physical umpire to manage any situation. He is called a referee who is a human being and thus fallible. That is why you have in football history such coinages as the a�?hand of God, clean sheet, clean sheet, park the bus, stay on your feet, dead ball specialist, amongst others. Put simply, there can be cheating in the game. And the commonest question after a match is who won and with how many goals. This could be followed by another question from a fan with special interest: But who played better?

The 19 years of democratic governance in Nigeria are full of intriguing, yet intricate experiences and revelations. These years are shared between two political parties, the PDP and the APC with the ration of 16:3. Furthermore, the years are shared amongst four Presidents namely: Olusegun Obasanjo who had eight good years full of (in)actions, Umaru Musa Yara��Adua with two and half years full of target goals but invariably soiled by ineptitude as the soul was willing but the body weak, Goodluck Ebele Jonathan with six and half years full of garrulous and overzealous supernaturalism and Muhammadu Buhari with three years by May 29 full of manifestations yet unfolding. The three first Presidents ruled under the PDP, while the last is ruling under the APC. By this simple calculation, the PDP is winning the APC by number of years. And according to independent investigations, both teams have 11 key players with many substitutes and fans.

Nigerians have been agog to discover or at least decipher the differences between the 16 years of PDP leadership and the three years of the APCa��s in terms of fulfillment of electioneering promises, development of human and material/capital resources and institution or reinstitution of the glorious ethics and culture Nigeria used to be known for in the past. Of course, it has been an interesting challenge between the two parties. But Nigerians have been watchful and proactive much more than before.

The PDP had produced three presidents of Nigeria, APC one. It could be very haughty to claim that nothing positive was achieved for Nigeria in the 16 years of the PDP leadership. The greatest achievement of the PDP is sustenance of the unity of Nigeria. They came at the time the unity of Nigeria was profoundly threatened. The respect from the western countries for Nigeria then was below zero point and PDP was able to brush it up. The effects of the military juntas were overwhelming and the processes of producing then incoming leadership were flawed. The then president was not selected and elected on merit. Rather, it was to compensate a past mistake committed by a Head of State against democratic norms and demand. That is why a lot of (mis)steps took place all through the 16 years. The game sometimes became tough, but the referee was often partial and the docility of spectators was unimaginable. That is how the years sluggishly passed by and the Nigerian people were stage-managed, living on promises and hopes.

The PDP, looked upon anyhow from any angle, was able to stabilize democracy by successfully conducting elections and handing over to successive governments. Though there were aggressive adoption of unconstitutionality, cohesion and violence, to an extent, in the dealing of the federal system, the electoral processes produced elected officers in 2003, 2007, 2011 and 2015. Again, although it was later realized to be false stylish living, there was cash flow amongst the citizenry. Nigerians felt the flow of free monies. And corruption was consolidated, having been institutionalized by the earlier military administrations. PDP initiated many laudable projects but corruption marred most of the efforts as monies budgeted every year for every of such projects were diverted into private pockets with impunity. Needless mentioning some of those projects.

Surprisingly, confessions on the evils committed by the PDP are being exposed by members of the party. Though very lately and probably pushed by political interests, a former deputy senate president under PDP, Ibrahim Mantu, has confessed that his party was perfect in election rigging. They gavemoney to INEC boys and used the bad boys. a�?All our elections in the past, Ia��ve been in the game for about 20 yearsa�?, the two term deputy senate president between 1999 and 2007 confessed recently. Former Sokoto state governor, Alhaji Attahiru Bafarawa, confessed that PDP is paying for its sins. According to him, God is punishing the party for its sins against Nigeria. God, he said, is angry with PDP for offending Him and Nigerians, so He snatched the power and handed it to APC. Also, the governor of Gombe state, Ibrahim Dankwambo, has urged Nigerians to shun all forms of corrupt practices (past and present) and rise up against corruption.

The partya��s chieftain, Raymond Dokpesi, confessed that the party made a lot of mistakes during the 16 years it occupied the presidency. a�?Today, the PDP is described as the most corrupt party in the country; they said our leaders were clueless and corrupt. That was how they described former President Goodluck Jonathana�?, he said in Umuahia. And the partya��s chairman, Uche Secondus, has made the greatest confession and sought for forgiveness.

Basically, the 16 years of vague purposeful leadership of the PDP caused its failure to retain power beyond 2015, despite its projection to lead Nigerian for at least 60 years. Nigeriaa��s assets and properties were sold to party members; the top politicians made businesses without paying taxes to the PDP successive governments; blanket presidential waivers were granted on importations foe few powerful citizens. In short, like it happened during the Shagari-led democratic era, properties belonging to Nigeria were unbelievably and unpatriotically given out as a�?giftsa�? to some Nigerians who are today part and parcel of the problems, hardship and threats Nigerians are collectively facing. The a�?dashed awaya�? or a�?freely distributeda�? properties included but not limited to oil wells, farms, companies, in the power, housing, agriculture, health and educational sectors. Who owns the pension administration, the national health insurance management and other similar establishments which subject benefitting citizens to untold suffering and hardship for what they are constitutionally entitled to? That was unbecoming of democratic governments which legalized unguided urge for high-class corruption, to the extent that stealing of public funds was excluded from the list of corrupt practices. And the docility of the citizens was yet unthinkable.

President Muhammadu Buhari recently revealed that the PDP squandered about $500 billion oil earnings in the 16 years it was in power. According to the vice president, Prof. Yemi Osinbajo, corruption and impunity of the past was perfected by the PDP as the Jonathan-led administration shared N150 billion before it handover power. Abiodun Adebayo Lanry posted on his facebook wall that the economy Buhari is destroying is producing millionaires of PDP extraction like never happened in 16 years of PDP. Former Edo governor Adams Oshiomhole said the PDP failed to provide basic amenities and fight insurgency. There are current indications of PDPa��s inability to restructure Nigeria, despite its national conferences. The Boko Haram insurgents were on the rampage throughout the era.

In comparison, the APCa��s three years of leadership has made some visible achievements. Corruption is being practically fought, though carefully and gradually. Youth empowerment through N-Power and ministries are done on merit, though the general appointments are allegedly lopsided and largely based on pedigree and not merit. Military and other pensioners are being paid to forestall the eyesores of senior retired citizens wasting away in the streets of Nigerian cities from their villages in search of their hard earned money. N5 billion was recently released to the military Pension Board in 2018. The foreign reserve is on the increase. Internally generated revenues are on the rise and judiciously utilized. The monies and properties looted by heartless citizens are being recovered. The train projects, massive road construction and maintenance, improvement in power, fight against insurgency and terrorism, massive agricultural development, are some of the clear difference when 16 years are compared with three. It is just unimaginable how Nigeria will be if the APC maintains power for 16 years with the same high spirit of patriotism and nationhood-building. But will the cabals allow this spirit to last?

Nonetheless, the matches being played with Nigeria are on. However slothfully interesting, imposing and conditioning these matches are, the hope is there that our democracy has stabilized; threats to our unity are being tactfully handled or a�?maneuvereda�? and our economy is steadily growing stronger by the day. I leave the rest to compatriots.

The 10 Urgent Steps To Addressing The Herder-Farmer Terror Crisis