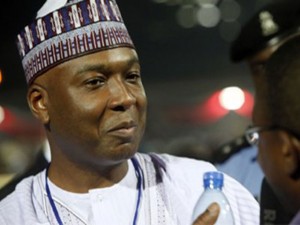 Party stakeholders in his home state of Kwara are worried that Saraki who earlier dumped the party for the All Progressives Congress (APC) would soon return to contest the 2019 presidential ticket of the PDP and hijack the party’s structure in the state.

Sequel to this, chairman of the Kwara PDP, Akogun Iyiola Oyedepo, on Wednesday led some political bigwigs in the state to the PDP National Secretariat, Abuja, where they met with the party’s chairman, Prince Uche Secondus and pleaded with him not to allow Saraki to hijack the party.

Briefing newsmen at the end of the meeting, Oyedepo said it was wrong to allow Saraki to a�?have his waya�?a�Z on grounds that he left the party when he was expected to help in building and strengthening it.

a�?We are apprehensive of what the national leadership can do to welcome somebody who had gone away from the party and is being given a royal welcome into the party.

a�?It is not Saraki’s coming that create any fear, it is whatever the national leadership can do to encourage him to seize the party’s structure from established people of Kwara State.

a�?Whoever is returning must respect the structure of our party and cooperate with us appropriately. We will welcome Saraki with open hands if he comes to be part of the party. We can’t say somebody should not join our party.

a�?In plain language, the executive that is on ground was constitutionally elected for four years and parties are always in anticipation of new people joining them. You cannot dismantle the structure of a party because someone is joining the party,a�? Oyedepo said. (Daily Trust)

8 thoughts on “PDP in frenzy over Saraki’s expected return”