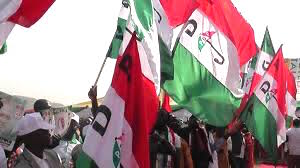 The National Executive Committee (NEC) of the People’s Democratic Party in her 87th meeting held on Friday 17th January, 2020 has resolved to embark on what she described as a nationwide peaceful demonstration to express dismay over the judgements of the Supreme COURT in recent times.

In a statement signed by the National Organizing Secretary of the party, Col Austin Akobundu (rtd), members & supporters of the party have been communicated to participate or join in the Sunday, January 19, 2020 proposed nationwide civil & non-violent protest against what they described as miscarriage of justice by the apex court in Nigeria.

It will be recalled that the Supreme Court on Wednesday, 15th of January delivered judgement in favour of the candidate of the All Progressive Congress, Sen Hope Uzodinma which truncated the 7 months reign of Emeka Ihedioha as Imo Governor & generated a lot of mixed feelings among Nigerians having ranked 4th position in the polls as earlier declared by the Independent National Electoral Commission, INEC.

The statement equally directed that all protesters must be on black attire and the procession must begin by 3PM simultaneously across major cities of the country.

Jubilations in Ekiti as court dismisses suit against Fayemi