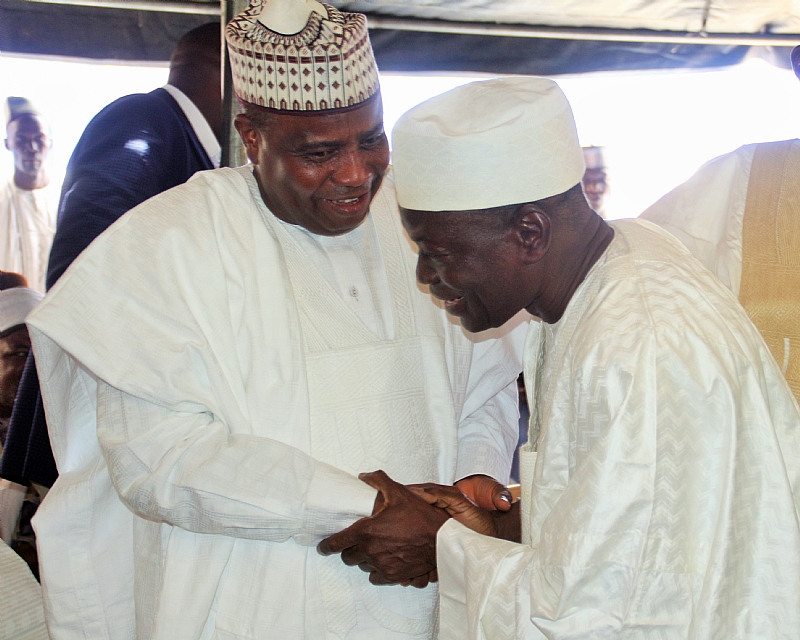 The longstanding political feud threatening the foundation of the ruling All Progressives Congress (APC) in Sokoto State have been settled, with the principal actors, Governor Aminu Waziri Tambuwal and Senator Umaru Dahiru Tambuwal attending a function together for the first time since 2014.

The former allies went their separate ways in December 2014 after the former Speaker of the House of Representatives defeated the ex chairman of Senate Committee on Judiciary to emerge the flag bearer of the APC for the April 2015 Sokoto governorship election.

Dissatisfied with the outcome, Senator Dahiru challenged the outcome and twice lost at the trial and appellate courts, before he was prevailed upon not to take the matter to the Supreme Court.

A source in Sokoto revealed that community elders and religious leaders intervened to ensure that the former allies are now back on the same page politically.

a�?It is true they have been settled. That was why the former Senator visited the Governora��s house in Sokoto on Saturday to attend a wedding ceremony. In the past, he had avoided such gatherings but this time, to prove that all past differences have been settled; he came to the venue and went straight to greet the Governor. He was also offered a seat in the front row and took part in all the activities as a respected family member,a�? said the source who declined to be named.

Further details revealed that the Senator has now accepted to join hands with Tambuwal and other APC stakeholders to move Sokoto forward.

a�?Since the reconciliation, he has privately expressed his joy at how the APC has been steering the ship of state. He has commended Governor Tambuwal on his stewardship and has given commitment to give his support to the success of the administration.a�?

Meanwhile, reports indicate that many of the former Senatora��s allies and immediate family members have been co-opted into the running of the government as a sign of goodwill.

Ogun 2019: To be Traded or as Compensation for Political Gains?