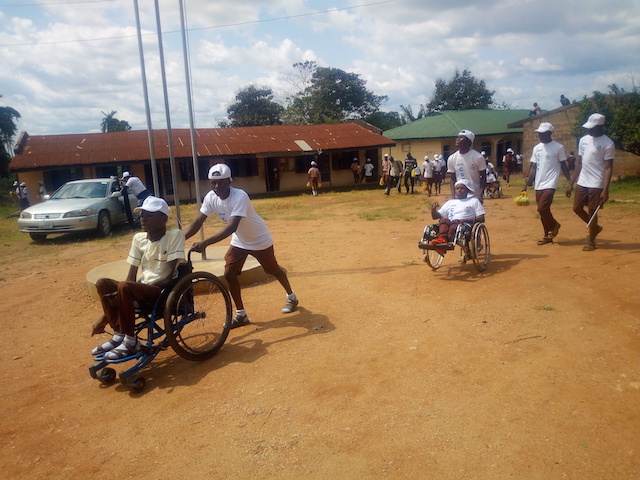 The commemoration of the World’s Disability Day on Tuesday, 3rd of December offers an opportunity to ruminate and reflect on the challenges and plight of persons that are living with disabilities so as to call the attention of concerned authorities, where necessary, to act promptly and alleviate the suffering of these persons and affect their lives positively.

In Osun State, there are 57,000 Persons with Disabilities (PWDs) as confirmed by the President of the Osun State chapter of JONAPWD, Mr Kehinde Onitiju, in reference to the last head count of PWDs in the state in 2012. Of course, now in 2019, the number would have moved up as he noted the association is growing incrementally and only God knows who is next to become their member since most of them were not born with disabilities and every living human being is prone to become disabled.

Persons with disabilities need economic empowerment and social inclusion so as to be reintegrated back into the society as normal citizens who equally deserve to live befitting and good life. In particular, the children that are living with disabilities deserve good education so that they would not become liability on the society as they grow up. Educated ones among them should get jobs, earn income and survive without resorting to seeking alms.

Their current plight and the state of neglect should not continue. Majority of persons with disabilities who managed to go to school and graduated are unemployed even several years after graduation whereas such persons should get automatic employment. Those that want to be self-employed among them lack financial capability in terms of initial capital and those in business already, couldn’t thrive because of lack of necessary supports. Many of them find it difficult to use some public facilities, especially those on wheelchairs as most public facilities still lack ramp. Yet, the stigmatisation persists and life is becoming unbearable for the persons with disabilities.

Fortunately, in Osun, there is hope for the persons with disabilities given the compassionate nature and the gentlemanliness of the Governor that the state is blessed with, Mr Adegboyega Oyetola. For the first time in the state, an incumbent Governor spent a day with the special pupils at the school of Persons with Special Needs in Osogbo, the state capital. The pupils trooped out from their class to catch a glimpse of the state governor, an unusual event they never thought could ever happen. With empathy, the emotion laden Oyetola watched and admired the pupils displaying rear talents to convince the whole world that they have capabilities in spite of their disabilities.

For Abokede, these pupils must be supported to achieve their full potential in life regardless of their condition and status and this necessitated the support from Osun-CSDP particularly as poverty alleviation and social inclusion is part of the focus of the administration of Governor Oyetola and the real focus of the CSDP.

Abokede noted that the state government in conjunction with the World Bank through Osun-CSDP committed N109,317,855 for 48 Socially Inclusive Micro-Projects across the state including the four inaugurated in the school.

This is a milestone and these microprojects are contributing and will continue to contribute to the achievement of the state’s development plan. It is impressive that the state government under the able leadership of Governor Gboyega Oyetola is willing and committed to doing more for the inclusion of the persons with disabilities in the state.

In conclusion, persons with disabilities deserve to live normal life and must be supported. Necessary mechanisms including the Disability Act/Law should be implemented without further delay and states should also domesticate it. The Osun State government and its agency, Osun-CSCP have done great and should do more. Other states must emulate Osun on this. We must all play our parts to make life bearable for the persons with disabilities so that happiness will go round and we will have the agape love.

Only Illiterates, the Paid and the Wicked Support Buhari and Atiku, APC, PDP

I stand with General Buratai and the Army