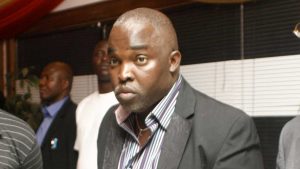 Pinnick was elevated to the position after the corruption case brought against former Ghana FA President and CAF 1st VP, Kwesi Nyantakyi, was ousted at CAF Executive Committee meeting, after a well attended congress in Cairo Egypt.

.
CAF executive committee had on Wednesday agreed to allow FIFA Secretary General take charge of the administration of CAF for a period of 6 Months.

The FIFA Secretary is expected to take over the running of CAF in spite objection by some Executive Committee members.

Samoura will be in charge for an initial six-month period due to begin on August 1, with her team responsible to carry out a “full forensic audit” of CAF, whose President Ahmad Ahmad is facing allegation of corruption.

Ahmad was arrested over corruption charges in Paris last month.

A twitter user Osasu Obayiuwana who is in Egypt tweeted a message saying that the it was unclear why Pinnick was removed.

Reports indicate that CAF president Ahmad Ahmad, who replaced longest-serving Issa Hayatou in 2017, no longer have the support of Pinnick.

Pinnick helped in the ouster of Cameroonian Hayatou and the installation of the Madagascan as the new head of the continental football body.

Relationship between Pinnick and Ahmad, the reports further indicated, had been frosty since the Nigerian became the vice president, with Pinnick’s decision to walk out of a controversial vote to order for a replay of the 2019 CAF Champions League final, believed to be the final straw that broke the camel’s back.

But a statement by Ademola Olajire, NFF Director of Communications in Abuja, said Pinnick’s tenure along with that of the 2nd and 3rd Vice Presidents ended on Thursday.

Giving reasons for Pinnick’s removal, Olajire said: “In line with Article 22 (4) of the CAF Statutes, every two years when elections are held at the CAF Congress (as took place today), the CAF Executive Committee on the proposal of the CAF President, elects a 1st, 2nd and 3rd Vice President, respectively from among its members.

“Significantly, the renewal of Amaju Pinnick’s tenure was not proposed by the CAF President because of fundamental differences on focus and direction.

“Pinnick accepted the decision of the President as it aligned with his own view having considered matters surrounding the administration of African Football which have dovetailed into the Nigerian Football space.

“He will, however, remain a bonafide member of the CAF Executive Committee to continue with his mandate as such,” the statement said.

Pinnick was quoted as saying in the statement, “It has however been an excellent opportunity to serve as the number two football administrator in the entire African continent and my commitment to the game is perpetual while my support for my colleagues in the Executive Committee remains steadfast. I congratulate, Omari, Lekjaa and Danny on the assumption of their new roles as 1st, 2nd and 3rd CAF vice presidents respectively,”