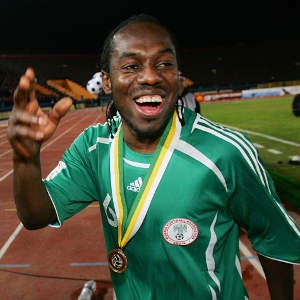 Oruma has been depressed after being defrauded to the tune of N2 billion by fake oil businessmen.

a�?a��By next week, Oruma will move into my house before they finish furnishing the three-bedroom flat where he would stay.

a�?His story is a pathetic one and we cannot allow him to die. I am rendering this help to him from one Warri man to another. We are Warri Ambassadors.

a�?a��All we need to do is to show him, love. I ate with him. Hea��s stable. The NFF will include him to play a role in our award ceremony coming up soon.

a�?Ia��m still talking with some of the clubs he played for to allow him to come and do a coaching course with them,a��a�� Pinnick said.

Pinnicka��s personal Foundation is footing the bills for his rehabilitation.

The Right Track, with Lincoln Moore and Ben Scadden