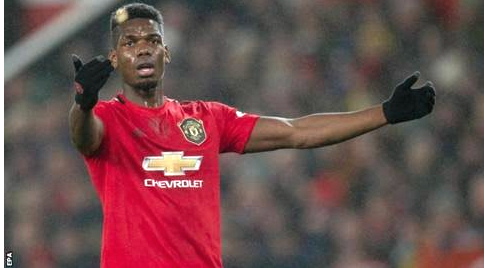 Manchester United French midfielder Paul Pogba has promised to return with a bang and not as the lethargic midfielder who limped off against Southampton last December.

Pogba, 27 have suffered a foot injury amid strong speculations linking him to a move away from Old Trafford. But the world cup winner has put all that behind and is raring to go once the season is given the green light to resume.

Pogba said in a United podcast “I’m already training and touching the ball, I’ve been frustrated a long time ago. Now I’m almost there, so I’m just thinking about getting back and training fully with the team and everything.”

While giving the insight to his long term injury that has reduced him to just eight appearances in the Premier League this season, and thirteen in all competitions. He said “So I had a foot injury, which came in the game against Southampton. It was early this season and so I carried this for a long time, training and trying to be playing with it. After I stopped, I found out I had a fracture.”

He further explained “I had a cast on it, a plaster-cast, so it went very well but too well. The bone got bigger and so, when I came back again, I played those two games against Watford and Newcastle, I could feel something again.

“So I had to have an operation and now here I am. I don’t feel anything and, hopefully, I’ll be back very soon.”

In Pogba’s eight appearances this season, Pogba has registered two assists, which came on the opening fixture against Chelsea at Old Trafford but has struggled to find the back of the net.

’They can’t suspend Jack for that’

14th August 2017 mustyzod 2
We use cookies to ensure that we give you the best experience on our website. If you continue to use this site we will assume that you are happy with it.Ok