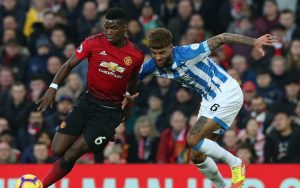 W hen their relationship reached breaking point in September it felt inevitable that only one from Paul Pogba and Jose Mourinho would survive long-term at Manchester United and the biggest surprise was just how rapidly the manager was ejected in the weeks that followed.

As for Pogba, he may never be the player whom United hoped they were signing, one that could be transformative for a whole generation rather than just the occasional game, but the unshakeable confidence of the man who cost £89million endures nonetheless. Sometimes that can translate into the anonymous, careless performances that infuriate managers and other times, as with this occasion, he can deliver two goals and finish the day dancing in front of the Stretford End.

Pogba was not United’s best player against Huddersfield, but when the moment demanded he buried two second half goals with the self-belief that seems impervious to the criticism that has followed in the wake of Mourinho’s departure. It was a little taste of what he could be, in the right kind of team, with the right guidance although it was not long before he was beaten for a routine header which gave Mathias Zanka the opening to score his team’s goal. A minor point in the grand scheme of things, but indicative of the great Pogba conundrum.

For Ole Gunnar Solskjaer it was enough for now that his temporary regime have won his two games in charge and United are at least within sight of the top four. Most likely the question of what happens to Pogba will be for another man to solve in the long-term, although he has two goals and two assists in two games for Solskjae. It can be hard to explain how this accomplished footballer, with so many gifts, does not regularly dominate opponents this way.

“That’s the Paul I know,” Solskjaer said. “The Paul I have known since he was in the youth team and reserves. He’s always been a happy boy, with a big smile on his face and when you score two you’re happy – you should be. Palying for Manchester United it’s a responsibility and Paul loves playing for this club, he’s a Manchester United boy through and through, and he knows what it means.”

T here will be more severe tests for United than Huddersfield and Cardiff City, beaten on Saturday, and it will be intriguing to see how they handle the upwardly mobile Tottenham Hotspur and their manager Mauricio Pochettino when they meet on Jan 13. Solskjaer had been true to his word so far in allowing his team to pass the ball forward rapidly and to press high up the pitch but when they go to Wembley to face Spurs that plan may have to be adapted.

Nemanja Matic gave United a first half lead and this was a good day for United’s disaffected support against a spirited Huddersfield team. It returned some of the joie de vivre to Old Trafford and by the end the Stretford End were demanding a wave from Solskjaer, then his assistant Mike Phelan, and then the coach Michael Carrick. Solskjaer gave ten minutes to the 18-year-old substitute Angel Gomes, which was met with a roar of approval from the home crowd.

For Huddersfield, bottom of the league, there was cause for regret because, as their manager David Wagner pointed out after the game, they had chances but failed to take them. As on many occasions for United over recent years there was a crucial save from David De Gea at a point when the victory was less secure. He stretched to push away Laurent Depoitre’s goalbound shot which would have been an equaliser, although by the end the margin was comfortable.

Depoitre’s was not the only opportunity, there were others for Terence Kongolo early in the game, and then Philip Billing just before half-time. “We were beaten by the world-class of Paul,” Wagner said, which was generous in the circumstances but intended to emphasise the difference in the quality of the finishing. The Huddersfield manager reluctantly conceded that it does look a little grim for his team, five points off safety at halfway, but he is right to say the performance give hope.

S olskjaer gave a start to the Brazilian midfielder Fred, another one of those who found himself excommunicated under the final days of Jose Mourinho, and there was also a place in the team for the 19-year-old Diogo Dalot. Both of them were off early in the second half, Dalot struggling with the pace of Kongolo and Fred just struggling in general. Solskjaer is trying to include all those with Mourinho grievances but some are already proving easier to leave out than others.

He has Alexis Sanchez close to fitness, and Anthony Martial and Romelu Lukaku back soon which prompted the United manager to wonder aloud what it would like to be able to bring those players from the bench to “finish off” opponents. The first goal looked like the kind of set-piece they had worked on, a near post run by Victor Lindelof who steered on the corner and it was as much as Christopher Schindler could do to head it out. Matic was in the right place to score his first goal since March.

Pogba’s two goals came after the hour. The first finished after Juan Mata got in down the right, and the ball worked on to the Frenchman by substitute Ander Herrera. The second was confidently dispatched from Jesse Lingard’s pass. The substitute Steven Mounie out-jumped Pogba to steer the ball down to Zanka for Huddersfield’s goal.

This was a good day for Pogba which shows just how quickly big players can change the mood in a stadium. Building a real lasting legacy at a club takes years, however, and already he is a long way back.  At times over the last two years it has seemed like he was too expensive to fail, which is not the way any elite player would wish to be remembered.

I t does not add that United were on top for long periods without being clinical, nor that the visitors enjoyed a strong spell after the interval where they might have got back in it. All in all, a comfortable and cheering victory for  the hosts. OGS has two in two, Pogba scored two, and United – with another easy game coming up next – are heading in the right direction as the year comes to a close. I am now off to blog the Arsenal – but we will have our match report up ASAP. Cheers.