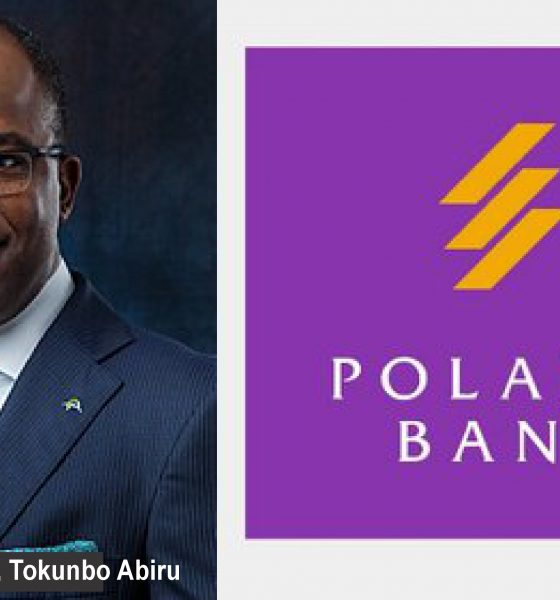 Investigations reveal that the Group Managing Director and Chief Executive Officer of Polaris Bank Ltd, Adetokunbo Mukhail Abiru, is currently battling to save his head following series of petitions at the Presidency seeking his removal as the banka��s Chief Executive over poor performance of the bank.

This is predicated on the move by the Asset Management Company of Nigeria (AMCON), which is currently seeking new investors to take over the nationalised bank.

In one of the petitions, a group, Integrity Movement for Good Governance (IMGG), urged the president, Muhammadu Buhari to beam its searchlight on the struggling financial institution, its current financials and the takeover of the bank.

In the petition signed by its president, Mr. Babafemi Adeniji, and titled: a�?Request for Presidential Inquisition into Polaris Bank Limited led by Mr. Adetokunbo Mukhail Abirua�? the group said it was worried that like the defunct Skye Bank, the federal government is again on the brink of losing several billions of naira due to inexperience and lack of expertise of the management of Polaris Bank led by Abiru.

a�?We believe a lot of water has pssed under the bridge at Polaris Bank. Everybody wants to know who did what and how to put to rest all our fears about all the improprieties.

a�?The bank is currently run by inexperienced lot. It is time to sack some people and bring sanity into the place,a�? the petition read in part.

Among the requests made by the group is for the president to probe the financials of the bank under Tokunbo Abiru in the last three years and also to investigate the irregularities surrounding the take-over of the bank.

Recall that on July 4, 2016, the Central Bank of Nigeria intervened in the management of the Skye Bank Plc (now Polaris) by reconstituting the board of directors, shoring up the bank with N100bn capital injection, and accordingly, the apex bank gave the board a clear mandate to turn the institution around positively. The regulatory action on the bank led to the resignation of its chairman, all non-executive directors on the board, as well as the managing director, deputy managing director, and the two longest-serving executive directors on the management team.

Two years down the line, (precisely, September 22, 2018), the CBN again intervened in the ailing Skye Bank and the operating licence of the bank was revoked to give way to Polaris Bank Limited, a bridge bank created by the apex bank in consultation with the Nigerian Deposit Insurance Corporation (NDIC), to assume the ownership of the assets, all deposit liabilities and some other liabilities of distressed and defunct Skye Bank.

Shareholder groups across the country reacted bitterly to the takeover of Skye Bank describing it as illegality and impunity on the part of the CBN and other regulators in the financial service sector. The national president, Constance Shareholders Association of Nigeria, Mallam Shehu Mikail, faulted the CBNa��s claim that shareholders refused to recapitalise the bank.

a�?Since the composition of the interim board by the CBN in 2016, shareholders have been kept at perpetual suspense. There has been no board meeting whatsoever. I recall that it was the apex bank that constituted the interim board of the bank in 2016. It also extended its tenure for another two years. Therea��s no transparency in the management of the bank thus far. No due process was followed by the parties involved. We are determined to fight this to the end because we see this as undue intimidation by the CBN and other agencies of government,a�? Mikail had said.

In the takeover, a fresh N786 billion soft and long-term financing at single digit interest rate was injected to keep the rejuvenated operations ongoing.

Ironically, three years after the CBN intervention into the affairs of the Tokunbo Ayeni-led bank, the fortunes of the financial institution have continued to dwindle.

This, The Witness privately gathered, is not unconnected with the poor results of the bank due to lack of trust customers now have with the lender triggered by the lack of administrative experience and expertise of the management led by Mr. Tokunbo Abiru.

Abiru, with a career in banking spanning about 26 years and an amazing profile as an alumnus of Harvard Business School (Advanced Management Programme), Lagos Business School (Senior Management Programme), a fellow of the Institute of Chartered Accountants of Nigeria (ICAN) and an honorary senior member of the Chartered Institute of Bankers of Nigeria (CIBN), financial analysts expected a major turnaround for Skye Bank (Polaris Bank) under his watch but reverse is the case

A visit to the lendera��s headquarters located at 3, Akin Adesola Street, Victoria Island, Lagos, will tell how its branches operate a�� in a low-key setting. The once-bubbling branches of the bank have now become a shadow of themselves as many depositors of the bank have started closing their accounts.

While other commercial banks in the country are leveraging on digital innovations to enhance customer service delivery and open fresh streams of revenue, Polaris Bank is said to be languishing in its stone age system of operations.

Investigations by The Witness revealed that the banka��s internet banking APP, its Unstructured Supplementary Service Data (USSD) banking platform, *833# Smart Code, are nothing to write home about as customers of the bank have continued to experience difficulties using the services.

Industry experts and financial stakeholders had frowned at the fact that Polaris Bank was handed over to a management and board which could not manage the finances of the now-defunct Skye Bank. This was despite the fact that the financial institution had been recapitalized two years earlier.

Then, many wondered why the Tokunbo Abiru and Muhammad K. Ahmad-led board was saddled with managing Polaris Banka��s new single digit interest long term facility worth N786 billion in assets, as they were sure that the finances would also go down the drain.

Explaining the consequences of the move by the CBN, a financial analyst, Tunde Biobaku, had said: a�?When a bank is recapitalized, there is always the need to name a new board who will handle the new investment.

a�?If you use the same set of people, they will run down the business just like they initially did to make the bank need recapitalization in the first place, so what the CBN has done is very confusing because the same guys that couldna��t do well with Skye Bank are now managing Polaris Bank, the end result is already clear, crystal clear.

a�?Whatever is the situation, one basic truth is that Polaris Bank in the hands of the same management that couldna��t salvage Skye Bank Plc is only poised to fail except of course if the Asset Management Company of Nigeria (AMCON) can quickly find a buyer before the invested N786 billion is goes down the drain,a�? said a source.

a�?They would leave Polaris Bank worse than they met it, you mark my words.a�?

Sources in the know further attributed the struggling state of Polaris Bank to the political affiliations of Abiru.

Reports say Abirua��s appointment to the bank was made and influenced by political considerations. The former First Bank director was allegedly nominated and installed at the helm of affairs of the bank by the national leader of the All Progressives Congress, Asiwaju Bola Tinubu. This is because Tinubu still has some interest in Skye Bank as a carryover from his investment in the defunct Bond Bank. Prudent Bank, Eco Bank, Bond Bank, Co-operative Bank Plc and Reliance Bank merged in 2006 to form Skye Bank thus Tinubua��s interest in the affairs of the Polaris Bank, particularly the quality and depth of its new management. Abiru was Lagos commissioner of Finance (2011- 2013) under the leadership of Babatunde Fashola, the current minister of Power, Works and Housing.

a�?Everyone knows that Tokunbo Abiru is a politician and a strong loyalist of the national leader of the All Progressives Congress, Asiwaju Bola Tinubu, hence, he doesna��t have free hands to operate. Every of his moves is controlled and checked by the powers that be,a�? a source stressed.

Our source further divulged that at assumption at Skye Bank (now Polaris Bank), Abiru recruited new staff (who are his loyalists) and drafted them into strategic positions in the bank. The bank chief is also said to have brought in new contractors (believed to be his loyalists) to execute the banka��s projects.

All efforts by The Witness to reach Mr. Nduneche Ezurike, Head, Strategic Brand Management, Polaris Bank for the lendera��s angle proved futile as several calls and text messages placed to his mobile number were not responded to as at press time.