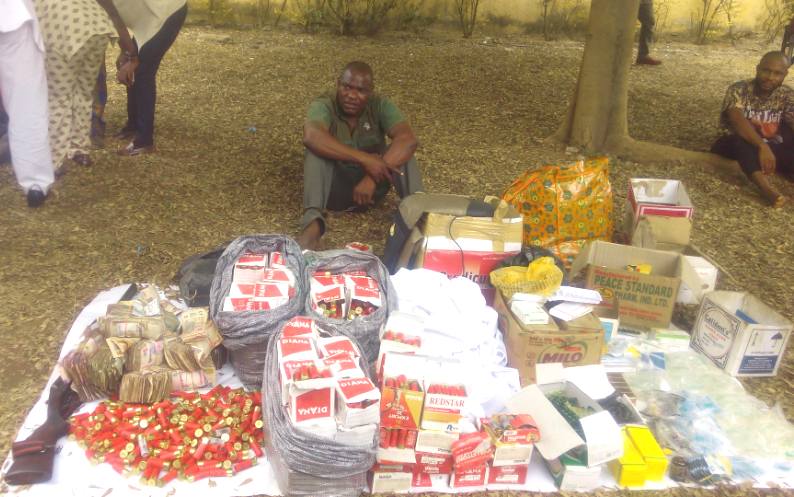 The suspect who runs Salvation Army Church Mbiri, Ika North East Local government area in the state with 34 others who are involved in various crimes was paraded before journalists Thursday, at the Police Command Headquarters, Asaba, by the Commissioner of Police Muhammad Mustafa.

According to the police boss, following information received through discreet Intelligence gathering that one Ignatius Ogboi, a business man and Pastor who specializes in sponsoring kidnapping/armed robbery operations within Agbor, Umunede and its environsa�?.

He noted that operatives of SAKCCS Asaba led by the O/C, stormed his residence with a duly signed search warrant, a�?arrested him and recovered a loaded English Made double barrel gun, three thousand eight hundred and seventy one live cartridges, some prohibited drugs and undisclosed amount of money believed to be ransom collected from victimsa�?, adding that the case is still under investigation.

Ogboi, who owned up to the crime, said it was unfortunate, stressing that he was arrested with a�?six cartons of cartridges, each carton contains 25 pieces for vigilante. They told me to get it at cheap rate for them where they can buy ita�?.

But he claimed that he has never sold to anybody neither armed robbers, a�?the arm is what I have been using since 1980a�? but stated that he operates a medicine store where he sales drugs.

He noted that the Tramadol was recommended for his wife who is unhealthy and a�?I also mixed it for those who are having serious painsa�?, stressing that the fake monies found on him were kept from inferior money used to paid him by customers a�?and I have been keeping them for the past five years on my table in my room because I run a patent medicine and provision shopsa�?.

He also stated that due to the absence of banks in Umunede, he saves his income in the house before turning them to the companies he belongs to, a�?the money you see, is the money I have been selling since February because in Umunede, we dona��t have a banka�?.

On the N4 million found on him, he said, a�?I am supposed to have more than N4 million if market was favourablea�?, he said.

On his calling, he said, a�?it is unfortunate, I have been in the ministry since 1996a�? but noted that no kidnapper or armed robber would say he belongs to his group.