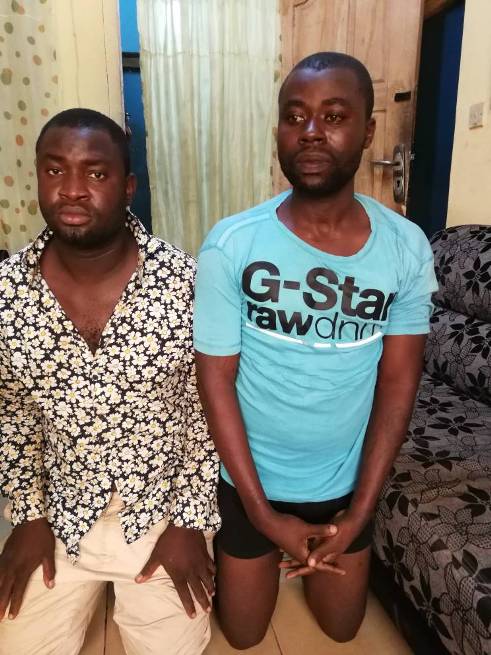 The General Overseer of God’s Favour Ministry in Lagos State, Pastor Daniel Onwugbufor has been arrested by men of Ogun State Police Command for armed robbery.

The Police Public Relations Officer for Ogun State Police Command, Abimbola Oyeyemi told The Nigerian Voice that the Pastor was arrested along with one Israel Animashaun through technical intelligence by men of FSARS led by Uba Adams.

According to him, “their arrest followed series of car snatching report which the command has been trying to unravel and have been working on a clue to smash the syndicate.”

“The efforts paid off when one of the snatched cars, a Lexus RX 330 jeep was tracked down to the Pastor at his Iba resident consequence upon which the Pastor was promptly arrested.”

The PPRO said the arrest of the pastor led to the apprehension of Animashaun who is an active member of a 3 man gang of armed robbery syndicate specialized in snatching of exotic cars on gun point.

“On interrogation, Animasaun confessed that he and 2 others snatched the Lexus jeep on gun point at Ajah in Lagos and took it to the Pastor who used to help them in selling such robbed items.”

“He stated further that the Pastor only paid him the sum of #350,000 for the car after using it for two weeks before he sent it to his other accomplice in Onitsha who is still at large.”

Animasaun also told the Police that he once robbed somebody of a galaxy samsung handset which the Pastor bought for #35,000 from him.

The Pastor who first denied knowing Animasaun to be an armed robber later confessed when confronted by Animasaun. Tne Pastor blamed the devil for his action.

He informed the Police that the Snatched Jeep has been sent to his accomplice in Onitsha but promised to work with the Police to get the said accomplice arrested.

The police spokesperson told The Nigerian Voice that police detectives are making efforts to get the accomplice in Onitsha arrested.

Meanwhile, the Commissioner of Police, CP Ahmed Iliyasu has directed the FSARS operatives to intensify effort to get all members of the syndicate arrested.

PLATEAU STATE AND THE NON-NEGOTIABLE PEACE

UCHE OGBUAGU FLOATS ANOTHER RADIO STATION AS MYRADIO CLOCKS ONE