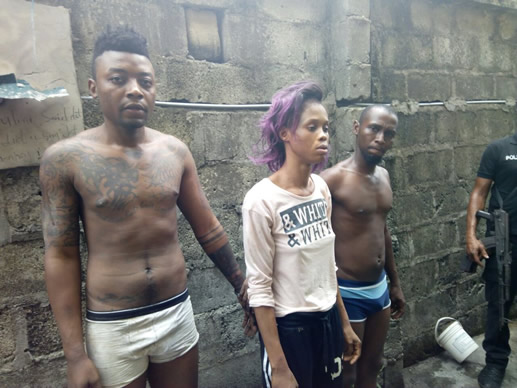 Operatives of the Rivers State Police Command have arrested three suspected armed robbers, who shot and killed a dispatch rider, who had gone to deliver smartphones to them.

It was gathered that the armed robbers had ordered for smartphones from an unnamed company and had waited at their hideout for the firm to send the items across through a courier.

The PUNCH learnt that the dispatch rider, who had gone to deliver the items on Saturday, was unmindful of the fact that the receivers of the goods were armed robbers.

A source told our correspondent that on getting to his destination, the yet to be identified dispatcher rider was thoroughly beaten and killed with a gun.

It was learnt that the body of the courier was thrown into a soak-away pit.

Confirming the incident in a telephone interview, the State Police Public Relations Officer, Mr Nnamdi Omoni, said a group of policemen, who were on patrol arrested three hoodlums, including a girlfriend to one of them.

“I can confirm the incident. What happened was that these armed robbers ordered for smartphones from a certain courier company in Rivers State.

“Then the company sent the phones through a dispatch rider. On getting there, the hoodlums beat up the dispatch rider and later shot him and he died inside their flat.

“After killing him, they (hoodlums) took the corpse to a place, opened a soak-away pit and threw the victim’s body inside there. Our men, who were on patrol and acting on credible intelligence, arrested two of them and they showed us where they hid the corpse.

“The incident happened on Saturday on Location Road in Ada George, Port Harcourt. Three persons were arrested, including a girlfriend to one of the suspected armed robbers,” he stated.

Omoni, however, said that investigation was ongoing with a view to arresting other members of the armed robbery gang.