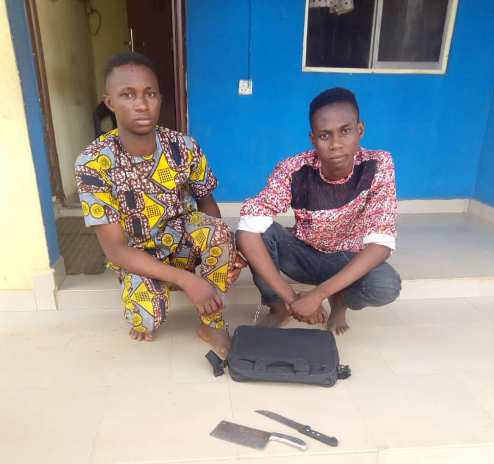 Men of Ogun State Police Command have arrested two men who robbed a woman lecturer at Unity area of Iyesi Ota in Ado-Odo Ota Local government area of the State.

The two suspects, Akindele Ramon and Paul King were arrested following a distress call received from the victim, one Busola Oke Salako at about 11:00pm that her house was under the siege of armed robbers.

On receiving the call, the DPO Onipanu Division Sp Sangobiyi Johnson quickly mobilized his anti-robbery men to the scene where the two suspects were promptly arrested with the help of members of the Community.

The victim Mrs Busola Oke Salako explained to the Police that she was inside the house with her house maid when her generator suddenly went off, which prompted her to ask the house maid to go and check what the problem was. Immediately the girl opened the door, the two marauders held her and covered her mouth with cloth and threatened to kill her if she makes noise.

The screaming of the maid when she was suddenly grabbed alerted the woman who quickly bolted the door from the back before making a distress call to the Police and some members of the Community.

The Police Public Relations Officer for the command, Mr Abimbola Oyeyemi said “On interrogation, one of the suspects Akindele Ramon disclosed that it was Paul King who gave information about the victim to him and one Rapheal Solarin now at large.”

“Akindele said Paul lives in the same neighborhood with the victim which gave him opportunity to know more of her movement.

Recovered from them are; One UTC Knife and one ordinary knife. Meanwhile, the Commissioner of Police CP Ahmed Iliyasu has ordered immediate transfer of the suspects to FSARS for discrete investigation and prosecution

Ambode Disagrees With Buhari Over Inauguration Of Eko Atlantic City