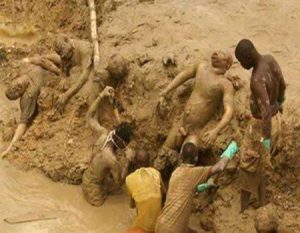 More than 14 miners were killed and 30 others injured over the weekend by bandits operating in the Birnin Gwari axis of Kaduna state.

The bandits reportedly stormed the mining settlement in their hundreds on motorbikes and attacked the miners.

Birnin-Gwari, which lies a few kilometres from Kaduna metropolis, is a gateway to the Southwestern party of Nigeria.

The Commissioner of Police in the state, Austin Iwar, disclosed this in an interview with the News Agency of Nigeria (NAN) in Kaduna on Sunday.

NAN reports that the 10 local miners were working in a minefield in Mahanga village in Birnin Gwari Local Government of Kaduna State.

a�?On Saturday, nine miners were killed and were buried, while 13 people were critically injured.

a�?Six were hospitalised at the General Hospital, Birnin Gwari, while seven were transferred to Kaduna for treatment.

a�?Today, one out of the 13 injured miners died and increased the death toll to 10,” he said

5 thoughts on “Police confirm death of 10 miners in Kaduna”