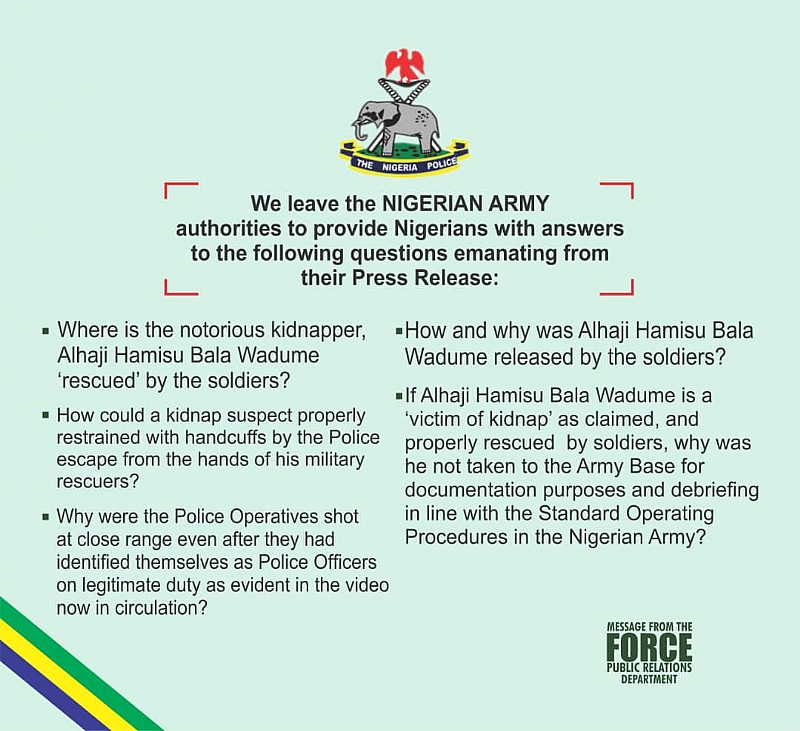 “This ethnic creasing must stop in Taraba, and it must stop in Nigeria. These killers have been protected by the military, they cover them and you must be watchful to guide and protect yourselves because you have no any other place to go.” – T. Y. Danjuma (Source: https://www.vanguardngr.com/2018/03/defend-will-die-ty-danjuma-tells-nigerians/ )

The above excerpt from the alarm raised by former Minister of Defense, Gen. Theophilus Danjuma in March of 2018, calling for Nigerians to defend themselves against a systematic government orchestrated ethnic cleansing, was held by some in disbelief till the bizarre events of August the 7th when Nigeria’s police reported that men of the Nigerian army killed policemen on duty who had identified themselves and set free handcuffed kidnap kingpin suspect, “Alhaji Hamisu.”

This is serious. Firstly let it be clear that the police are the only law enforcers in Nigeria. The police are the only constitutionally authorised body that can make arrests, indict and press charges in court. Except under military rule or martial law periods –meaning when a state of emergency is declared– Nigeria’s military only have a domestic role as an assistant to the police. See related section below.

This is obvious as the military have no handcuffs, no notebooks and like any one of us “bloody civilians” are not trained in documenting civilian crimes and making submissions to the Judiciary. This is why in domestic law enforcement, the military can only act as led and directed by the police, unless given particular duties by the National Assembly. Within civil society, soldiers have as much law enforcing rights as “bloody civilians.” Harmed, they have to report to the police as we do.

The Nigerian police force in their indictment categorically stated that the policemen killed by the Nigerian military promptly and properly identified themselves. The act of deliberately assassinating an officer of the law is an act of treason and terror.. The Nigerian army therefore stands indicted of these heinous crimes by Nigeria’s official law enforcers.

Nigeria’s Anti Terrorism Act of 2011 as Amended under its “ACTS OF TERRORISM AND RELATED OFFENCES” Defines:

(ii) seriously intimidate a population; (iii) seriously destabilize or destroy the fundamental political, constitutional, economic or social structures of a country or an international organization; or (iv) otherwise influence such government or international organization by intimidation or coercion; and (c) involves or causes, as the case may be— (i) an attack upon a person’s life which may cause serious bodily harm or death; (ii) kidnapping of a person;

The actions of the Nigerian army fall into the above descriptions of acts of terror – terror to civilians, terror to enforcement officials, and participation in organized kidnapping enterprise.

The Nigerian police force in their indictment categorically accused soldiers of the Nigerian army of deliberately freeing one of Nigeria’s most wanted kidnapping masterminds. This indictment exposes the military as conspirators, harbingers, and benefactors in the dastardly organised kidnapping terror enterprise threatening the very existence of Nigeria.

The Nigerian Police force in their indictment categorically accused soldiers of the Nigerian army, as constitutionally recognized as a second order in law enforcement, of interference with and willful obstruction of law enforcement. These are very very heavy indictments and acts against the constitution in promotion of anarchy.

Admitted Guilt: Concerns and Implications
The statement of the Nigerian army in response to the indictment by the Police serves as a culpability note and inadvertent admission of guilt in treasonable crimes against the State.

The Nigerian army admitted to assassinating Nigerian law enforcers on official duty who by law have no constitutional obligation to inform the army of their missions in service to the State, an excuse the army attempted to present.

The Nigerian army in its admission of guilt claimed it was responding to a distress call of kidnap. We hereby categorically confirm that all evidence indicates the call the soldiers received was a distress call from no one other than Alhaji Hamisu Bala Wadume, the kidnap kingpin who commanded them to come and rescue him from the police.

Blackmail: The fear of Alhaji Hamisu revealing cooperation and dealings with men of the Nigerian army, and exposing the involvement of men under Buratai in the running of the organized crime kidnapping enterprise, is seriously evident from the reported actions of the soldiers in freeing the suspect. It is also plausible that the officers killed were policemen who had already interrogated Alhaji Hamisu and who the soldiers assassinated to conceal links to themselves and the military top command which Alhaji Hamisu might have divulged during his arrest.

We challenge the army to provide details of the phone number from which the alleged distress call came and for this record to be verified by Nigeria’s mobile network companies.l and independent international investigators.

The Nigerian army in its denial claimed the police shot at them first. This is a grave counter claim accusing the Nigerian police force of willfully firing at soldiers. We do not believe the Nigerian police force will take this accusation against its injured, dead and distraught honorable intelligence men lightly. By its claim the Nigerian army is inferring that the police kidnapped a kidnapper. Why else will the police refuse to stop and go as far as firing at the soldiers. It is peculiar to note that no soldier was reported killed or even injured in the incident.

Nigeria’s police force has video evidence of its officers properly identifying themselves as the army unleashed terror on them. Importantly, the army claimed to have called a “Divisional Police Officer of Ibi Police Division” to first find out if there was a police action. While it is unbelievable that the army routinely first calls police stations to ask if they are on missions before responding to kidnap distress calls, recent follow-up statements by the vexed and frustrated police have dismissed these as lies, with the police stating that the raid even included men from the particular police division.

By admitting to killing Nigerian policemen on State duty and deliberately or inadvertently setting free an arrested terror kingpin, the Nigerian military has finally and totally rendered Nigeria lawless and ungovernable. No police officer will be able to do his duty henceforth and arrest criminals, kidnappers and terrorists for fear of being assassinated by men under General Buratai’s charge. This has far reaching implications and consequences on the sovereignty of Nigeria.

By not immediately suspending and arresting the accused soldiers but rather pushing an inadmissible counter-narrative, General Tukur Yusuf Buratai is indicted in culpable homicide, terror against the State, flaunt of constitutional role and the rule of law and frank treason. By allegedly freeing a kidnap kingpin, Buratai is also guilty of participation in organized crime, State terror and kidnapping and automatically becomes chief suspect in all kidnap cases across the federation which have been happening in locations and camps known to many as Senator Abbo lamented when his family were killed and abducted.

Buhari’s Culpability by Attempt To Coverup

By his coverup attempt, response to the treasonable incident, president Muhammadu Buhari becomes indicted as a patron or custodian of this accused military supervised kidnap enterprise. Buhari responded to the indicting report by Nigeria’s law enforcers, of military treason and cooperation with most wanted kidnappers, by ordering the Nigerian military to investigate itself. In this heinous crime, telling the military to investigate itself is a certain and indisputable coverup from the highest office. This unconscionable response is not only wicked and makes the president culpable in the acts against the state, but it also is in clear flaunt of the rule of law. Nigeria’s military have no constitutional right or role to investigate themselves for violations of the law, and to investigate the police. The police on the other hand are constitutionally authorized to investigate all matters bordering on law enforcement within the state of Nigeria. Therefore Buhari has used his authority to protect the kidnaping establishment of Nigeria by protecting Buratai and the soldiers under his command on “bizarre” duty guarding kidnap camps and going as far as killing police who arrest kidnappers.

This latest indictment adds on a list of not less treasonable offenses Nigeria’s military chiefs have been accused of which show a pattern of officers who have no respect for Nigerian citizens alive and dead.

Prior Cases of Crimes Against the State and Humanity by Nigerian Military Top Command:

1. General Tukur Yusuf Buratai was indicted by a Kaduna state governor Nasir el-Rufai judicial panel in the massacre of at least 347 shia minority Muslims and their secret midnight burial in a mass grave at Mando cemetery. Buratai and by extension President Muhammadu Buhari are jointly indicted in this case for not acting upon the report of the panel and punishing the indicted soldiers including major General Olukayode. (See confession: https://www.premiumtimesng.com/news/headlines/201615-kaduna-govt-says-347-shiites-killed-by-nigerian-troops-given-secret-mass-burial.html )

2. General Tukur Buratai in 2016 was implicated in the massacre of at least 100 Igbo youth in Onitsha and the alleged secret mass burial of same. (Read report here: https://www.premiumtimesng.com/investigationspecial-reports/205176-special-report-onitsha-massacre-pro-biafra-supporters-coordinated-sss-operative.html )

3. Recently the wall street journal repeated and validated calls concerned Nigerians and activists like Aisha Yesufu of BringBackOurGirls had made about secret burials of dead Nigerian soldiers. The Nigerian army under its leadership is accused of suppressing actual figures of soldiers dead to the extent it buries them en masse in secret to push a political tale of victory over Boko Haram.

We will never let this matter be swept under the carpet till there is total justice and true change. The fear of Nigeria’s military being hired protectors and collaborators of kidnappers and terrorists ravaging the country, and getting so brazen they kill our police officers to conceal their atrocities and release criminals is terminal. Buhari and his inSecurity chiefs have been known to be guilty by negligence and corruption, but this dimension of guilty by design and collaboration cannot continue without capital justice and leadership change.

We call on the world to come to our aid. The Nigerian police are the latest victims in crimes they have been a part of, but we cannot survive without our police and stand by them in their time of desperation as they become the latest part of the nation’s #RevolutionNow cries to end injustice, despotism, abusive impunity and frank tyranny!