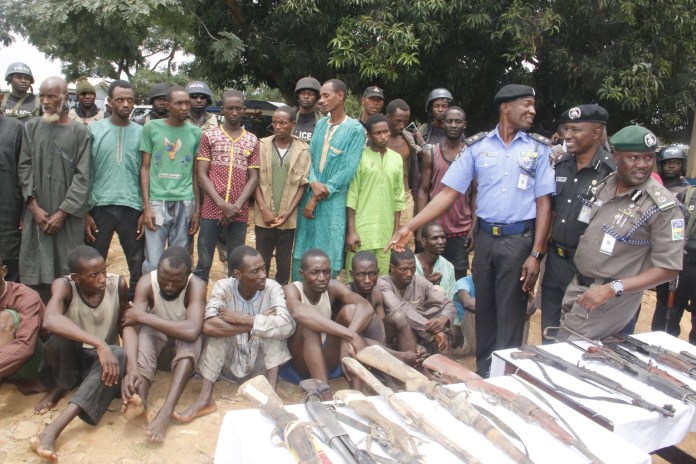 In a statement on Monday by the Force Public Relations Officer, (PRO) Jimoh Moshood, the suspects were responsible for several criminal activities bordering on killings, kidnappings, robbery in villages and towns along Abuja- Kaduna –Birnin Gwari- Funtua – Zamfara state a few weeks back.

Moshood, a Deputy Commissioner of Police, however, explained that the Inspector General of Police, Ibrahim Idris, was worried about the criminal activities on the highway.

“The Inspector General of Police (IGP) Ibrahim Idris, concerned with the new surge in violent crimes, such as kidnap, killings, Armed robberies of innocent Commuters/travellers and villagers in villages and towns along Abuja- Kaduna –Birnin Gwari- Funtua – Zamfara state few weeks back, re-gird operations Absolute Sanity with the deployment of more operatives and investigators of IGP Special Tactical Squad to unravel and arrest those behind the heinous and dastardly acts to bring the perpetrators to justice,” he said.

According to Moshood, 31 suspects in six different gangs including three Commanders of bandits that killed innocent people in Zamfara state were arrested.

The suspects were accused of being responsible for the kidnap of Sheik Mohammed Ahmed Alqarkawi in Kaduna State and collected a ransom of 12 million naira before he was released.

Items recovered from them include: 22 AK-47 Rifles, One LAR Rifle, two single Barrel Guns, One Locally made Pistol, One Dane Gun and 247 round of Ammunition.

Moshood also explained that most of the suspects confessed to the criminal roles they played in the alleged commission of the crimes.

He also stated that the police have rescued some of their kidnaps and would release the names of the suspects in due course.

Maryam Babagida Gets Recognition 8 Years After