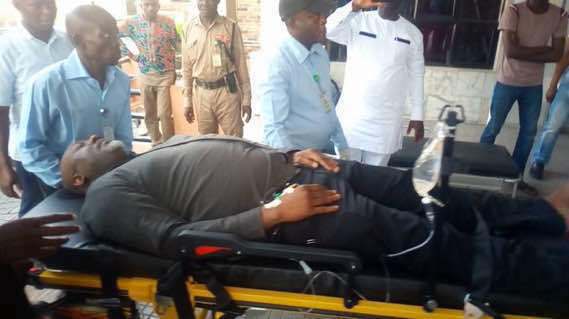 Senator Dino Melaye who was on Tuesday admitted to the Zanklin Hospital, Mabushi, Abuja, has been re-arrested by the Police.

Melaye was admitted after he allegedly jumped off a moving police van at Area One Roundabout, Garki, in an attempt to prevent the police from taking him to Lokoja, Kogi State.

He was alleged to have engaged the policemen in a scuffle during which he sustained injury leading to his admission in the hospital.

He said, a�?At about 1200Hrs of today Sen. Dino Melaye while in lawful custody of the Nigeria Police Force personnel and being taken for arraignment in Federal High Court Lokoja from Abuja, escaped from lawful custody when hoodlums and miscreants in two (2) Toyota Hilux Vehicles blocked the Police vehicle conveying Senator Dino Melaye around Area 1 Round About, Abuja and in the process the Senator jumped out of the Police vehicle through the window and was rescued from the Policemen by hoodlums and miscreants to an unknown destination.

a�?The Police team re-enforced and trailed Senator Dino Melaye to Zankli Hospital, Abuja where he was re-arrested. The Senator would be arraigned in court without further delay.

a�?Meanwhile, one of the Toyota Hilux vehicles used by the hoodlums and miscreants in aiding the escape of the Senator has been recovered by the Police investigation team.

a�?The Inspector General of Police has therefore directed a thorough investigation into the circumstances leading to the rescue and escape of Senator Dino Melaye from lawful custody.a�?

The senator was arrested by immigration officers at the Nnamdi Azikiwe Airport on Monday morning on his way to Morocco, but managed to escape from the security personnel.

But later on Monday, policemen stormed his residence at Shanga Street, Maitama, Abuja where they kept a vigil in a bid to arrest him.

On Tuesday morning, he surrendered to the operatives, who drove him away in a white Hiace bus followed by three other vehicles to the Special Anti-Robbery Squad facility at Guzape, Abuja.

According to a reportby The PUNCH, sources said the lawmaker representing Kogi West surrendered to the police after some of his senator friends received assurances from the police authorities that he would not be taken to Lokoja where he alleged he might be assassinated.

It was gathered that Melaye, on suspecting that the police were taking him to Kogi State, engaged the officers in the bus in a scuffle and managed to jump out of the van after it was blocked by unidentified vehicles around 2.10pm.

An eyewitness said about five hefty men, believed to be the embattled lawmaker’s supporters, emerged from nowhere in two pick-up vans and made to spirit the senator away in their vehicles.

The situation caused pandemonium in the area as the policemen who were shocked by the audacious act, threatened to shoot the lawmaker and his supporters.

This led to a scuffle during which the lawmaker was allegedly manhandled by the policemen.

Eyewitnesses said Melaye sustained injury during the incident and he was subsequently rushed to the hospital in an ambulance.

a�?The drama began at 2.10pm and lasted for about six minutes with Melaye’s boys in two Hilux pick-ups double-crossed the police escort and this gave Melaye the opportunity to jump out of the police van,a�? according to the eyewitness.

a�?Three policemen picked him up and attempted to throw him into the vehicle, but he resisted and later fell on the ground while shouting, ‘You must shoot me, you must kill me here, I am not going with you to Kogi or anywhere’.a�?

The police alleged that Melaye had contracted one Kabiru Seidu and his gang as political thugs, adding that the lawmaker met with the suspect on Airport Road, Abuja inside his car in December, 2017 and gave him a bag containing an AK47 rifle, two pump-action guns and N430,000 to share with his boys.

The police spokesman, Jimoh Moshood, could not be reached for comment on the incident as he did not respond to calls. He had yet to respond to an SMS as of the time of filing this report.

The Inspector-General of Police, Ibrahim Idris, also refused to comment on the drama when confronted by journalists during the inauguration of the Muhammadu Buhari Housing Estate, Mbora, built for policemen.