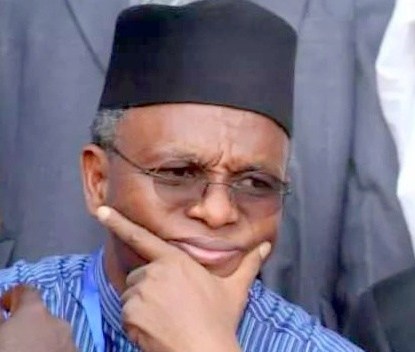 The crisis in the All Progressive Congress (APC) in Kaduna state got messier Sunday as the Restoration faction of the party led by Senator Hunkuyi announced the suspension of the state governor, Nasir El Rufai for six months for his failure to respond to a query issued to him last week Thursday.

El Rufaia��s suspension is coming two days after the main faction of the party announced the suspension of Senator Hunkuyi for six months and expelled 28 others.

But addressing a press conference in Kaduna Sunday, the factional chairman of the party, Alhaji Danladi Wada said the failure of El Rufai to respond to the query issued him necessitated the latest action.

a�?This briefing is sequel to 48 hours ultimatum/query and warning issued to the state governor to explain and defend himself against the allegations levelled against him which he failed to respond.

a�?The State Working Committee on Saturday 17, February 2018, convened and resolved to consider and to rectify the findings and recommendations of the Disciplinary Committee and the Fact Finding Committee put before it in accordance with the provision of article 21(B) section 3 of the APC constitution and accordingly, the Governor of Kaduna State, Mallam Nasir El-Rufai stands suspended for 6 months from the APC, commencing from 17, February, 2018.a�?

The group noted that the Presidential Reconciliation Committee led by National leader of the party, Asiwaju Ahmed Bola Tinubu, may hit the rock if El-Rufai refused to admit his faults.

A member of the Restoration faction, Mataimaki Tom-Maiyashi noted the Governora��s body language and action didna��t suggest the willingness to submit to genuine reconciliation.

He said other parties may benefit from the crisis in the party if the APC fails to put its house in order.

:a�?The Stakeholders welcome the initiatives to settle major issues which are dividing and weakening the party.

a�?The real reconciliation will only be achieved if justice and the willingness to take difficult decisions are upheld.

a�?Stakeholders observed that in Kaduna State, at least, the postures and actions of the governor, Nasir el-Rufai, and his associates do not suggest the willingness to submit to genuine reconciliation.

a�?All suspensions by persons other than those led by the acting chairman of the party, Alhaji Danladi Wada are exercises in futility, null and void.

a�?The acting chairman should exercise his full powers and conclude disciplinary actions against all members, no matter their positions in the party.a�?