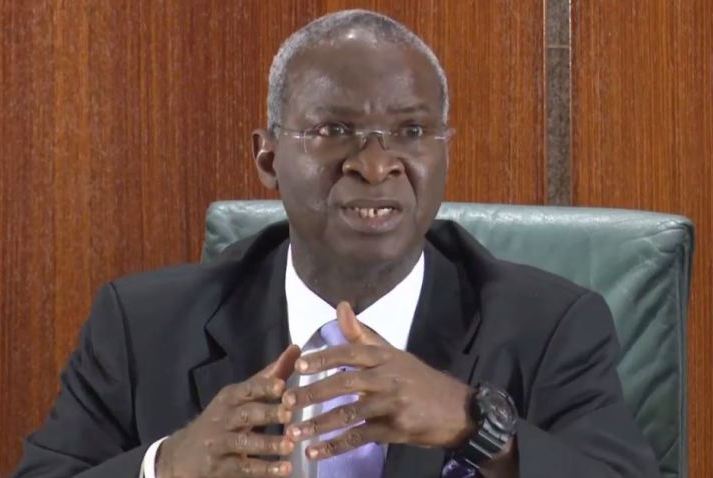 The Electricity distribution companies have publicly disagreed with the Minister of Power, Works, and Housing, Babatunde Fashola over 2,000 megawatts of electricity that he claimed to be stranded.

Disco sad there is no availability of such in the Nigeria power sector.

According to the distribution companies, they have found difficult to comprehend the Federal government claim about the 2,000MW of electricity that has stranded for over a year.

Concise News recalled that, In June 2018, the Minister of Power, Works and Housing, Babatunde Fashola, declared that about 2,000MW of electricity produced by power generation companies had been left stranded, as DisCos lacked the capacity to take all the generated electricity.

To effectively utilize the stranded power, the government introduced the Eligible Customer Policy, an initiative that empowers power consumers to buy electricity directly from generation companies instead of waiting to be supplied power by the Discos.

The policy, however, had yet to yield the desired results, as the Permanent Secretary, Federal Ministry of Power, Works and Housing, Louis Edozien, announced at a workshop in Abuja on Tuesday that since two years after the Eligible Customer Policy was unveiled by Fashola, no one had been fully licensed to enjoy the initiative.

“It is a bit disheartening that though it’s almost two years after that policy direction not one fully licensed eligible customer is enjoying this regulation,” Edozien stated.

The permanent secretary also reiterated Fashola’s position that about 2,000MW of electricity was stranded, a statement that was countered by the Discos at the workshop.

Speaking on the Eligible Customer Regulation, Edozien urged generation companies to more aggressively taking advantage of the regulation to sell the power they could generate to eligible customers who needed it and were willing and able to pay for it, as he told participants at the workshop that 2,000MW was stranded.

He insisted that it would be better than waiting for the Nigerian Bulk Electricity Trading company to pay for the stranded power or to guarantee it.

Edozien stressed that NBET needed support from the Federal Government due to shortfalls in payment by distribution companies.

The permanent secretary decried that though the minister issued the policy direction to the Nigeria Electricity Regulatory Commission that gave rise to the regulation in May 2017, and NERC had issued the regulation, none of the interested consumers and their generation company suppliers had been given licences to buy and sell power as eligible customers.

He, therefore, encouraged NERC to accelerate and simplify the licensing process.

But speaking on behalf of the Discos, the Deputy Managing Director, Ibadan Electricity Distribution Company, John Ayodele, wondered if there was any stranded 2,000MW of electricity anywhere in Nigeria.

Ayodele argued that he had been studying the country’s power broadcast on a daily basis and had yet to see such quantum of electricity staying idle without being transmitted or distributed as required.

He said, “I read the national broadcast and I am still asking myself: Is there any stranded 2,000MW hiding behind the stories, and I can’t find? And this issue keeps coming up.

“When I look at all plants that are available when you talk about installed capacity, it is different from capacity that can go on a bar. I look at the broadcast today (Tuesday) on maximum generation available, capacity unbarred is 4,666MW while at 6 am this morning, we were generating about 4,200MW.”

Ayodele added, “Available generation that can be made available based on gas turbines that are down or undergoing repairs will never take us to have extra 2,000MW.”

He pointed out that no Disco was against the Eligible Customer Policy of government, adding that it was important for the industry to abide by the laid down rules.

Ayodele said, “I believe that if we follow the rules as specified in the regulation, we should not have a problem. No Disco today can say it is against the eligible customer because there is no reason why the Disco itself cannot be an eligible customer.

“So, if you want to go to the cheap ones, we should be there first to buy all the power available on the hydro and leave you to stay with the gas. I think we should be very consistent with the rules.

“No Disco can hold somebody to ransom under this. If any Disco is holding anybody to ransom on this, then NERC is there because the regulation must work and succeed.”

NERC, however, disclosed that so far, 14 large customers had filed applications to become eligible customers in Ibadan, Abuja, Eko, Ikeja, and Jos.

Meanwhile, Edozien further stated that the Transmission Company of Nigeria should continue to support the Eligible Customer Policy by making targeted investments in the national grid as needed to service specific contracts with generation companies and eligible customers.

This, according to the permanent secretary, was in order for TCN to transmit the power, with penalties for failure to transmit, adding that TCN could finance such targeted investments with the expected revenue from such bilateral transmission contracts.