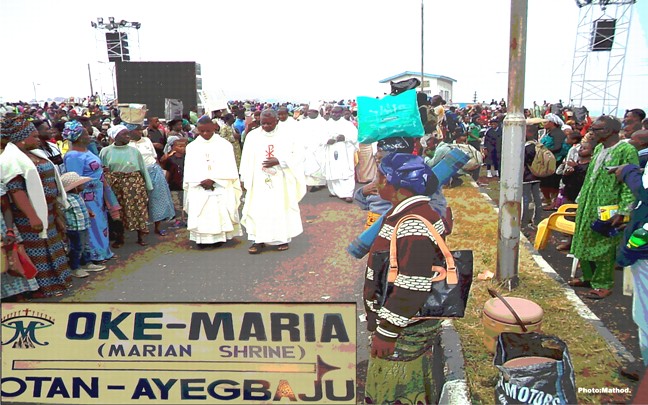 THE PRELATE of the Catholic diocese of Osogbo, Osun state Nigeria, Most Reverend Dr. John Akinkunmi Oyejola on Sunday 11th February, 2018 admonished Christians in leadership positions in the country to be good Ambassadors of the church in their service to the people for a better society and nation.

He made the call in his closing remark before the final blessing at the concelebrated Sunday Mass held to round up the 39th annual Oke-Maria Pilgrimage held at Otan-Ayegbaju in Boluwaduro local government area of osun state.

The pilgrimage started with an open air service at St. Nicholas Primary school playground in Otan-Ayegbaju. Pilgrims immediately after the service orderly lined up for the four hours candle light procession to the Marian shrine mountain top, praying, singing and dancing with joy and happiness.

The ceremonial crowning of the Blessed Virgin Mary statute in the shrine was performed by the Bishop in the company of a few Priests and after, many broke their fast with a light refreshment.

The first Bible exposition centered on the theme of the Pilgrimage for this year titled: a�?Mary at the foot of the Cross.a�?(John19:25-27).

The sin Adam and Eve committed in the garden of Eden, distant them from God because they ate fruits from the tree God instructed them not to eat from.

Because God is a merciful and loving father, he made way for the salvation of mankind through Jesus Christ who was divinely given birth to by the Blessed Virgin Mary, the Queen of peace the Mother of the church and today the corner stone of salvation.

There is the argument that, the two words a�?Woman and Treea�� play significant role in the study. The Tree and woman that brought sin to mankind, was the same Tree(the Cross) and woman(The Blessed Virgin Mary, mother of our Lord) who willingly gave her child up to bring back man to God (Salvation).

The Blessed Mother Mary, suffered agony, tribulation and humiliation for her son Jesus Christ, what a great love this is to the church and mankind. Blessed Mary prayed and supported her son to the point of death on the cross. The good virtues of the Blessed Virgin Mary are lessons for all mothers to emulate for a good Christian home and life.

The second Bible teaching on the story of the prodigal son looks compassionate and this gives a clear message, warning and call to sinners or those in the course of their journey in life have gone astray, to have a change of heart and come back home to God, a loving and merciful father for a new life and to receive abundant blessings irrespective of the challenges of life that they may presently be facing that has distant them from God.

Just as the prodigal son returned home to his father and received mercy after squandering his inheritance in a faraway land, Christians in Nigeria and elsewhere, have been asked to turn from their old ways, abandon their filthy past and return to God for mercy (Luke.15:11-32).

The third Bible reading and teaching was on the fear of Peter when Jesus asked him to come out of his ship and walk on the sea. He actually first took the step of faith and walked on the sea to meet Jesus, but when he became afraid with the threat of the strong sea wind(Stom) , he started to sink and Christ came to his rescue.

In this teaching titled: a�?Do not be Afraid,a�� Christians are admonished to shun fear, have faith and always put their trust in God. Many fear and sink in their Christian race because of the problems and challenges of life facing them. God loves us and will take care of us, if we truly love him and have faith in him.( Mathew 14: 28-36).

The Sunday Mass homily given by Reverend Father Stevenson Olowolagba, centered on the important fact that as Christians, sin just as any human ailment deform us, make us weak, rob us of many blessings , make us live an unclean desolate life and take us away from God.

In the days of the Israelites he said, when Moses as Prophet Shepherd the people, the disease Leprosy was a serious ailment, a Priest must confirm one infected with Leprosy does not live amongst the people because it is difficult to cure and could spread to others in the camp.

He said when Christ came, he healed all manner of sicknesses even Leprosy. Christ healed the Leper and warned him not to tell any body but go to the Priest and show himself healed to obey the laws of Moses through screening of his skin to certify that he had no leprosy symptoms, so that he can again be allowed to live amongst his people as a clean man.

As Christians he said, we must strive to walk clear of sins, to stay healthy so that our relationship with God will not be strained. He admonished Christians to always go to confession for absolution and mercy from God. When we are faced with the challenges of life with regards to sickness or ill health, he admonished that we must run to Jesus, the great healer.( Leviticus.!3:1-2,44-46) and Mark 1:40-45).

The congregation at the Mass prayed for peace in Nigeria and the world, the Church and wisdom for our leaders to serve the nation faithfully for the good of the people.

The good virtues of Blessed Virgin Mary, as a prayerful loving mother is appreciated and emulated by women globally in the catholic church, hence the formation of many women organizations with the main aims to serve and support the growth of the church.

The Otan-Ayegbaju Oke-Maria shrine was established on 8th December, 1979 by Ms.C.O. Otuyelu , the leader of a�?Good Mothersa�� society of St. Peter and Paul catholic church, Lagere Ile-Ife, with the permission and support of the then shepherd of Oyo/Osogbo diocese, Bishop Emeritus, Julius Babatunde Adelakun.

The date of the pilgrimage was changed to the second week in the month of February in 1984. Today the center organizes a mid-year pilgrimage in May/June.

The Oke-Maria Praying and Evangelization center became a United Nations Education and Scientific and Cultural Organization(UNESCO) world heritage site in 2008.

The development of the center by the church is ongoing with support coming from within and outside the diocese to raise it to UNESCO standard to meet spiritual, social and economic needs of the people. The center since inception, has attracted local and foreign visitors most importantly Christians.

Otan a��Ayegbaju is an ancient mountain town. A great majority of the native inhabitants are Catholics and the first catholic church, St Nicholas catholic church, was built in 1925 and is a good place for tourists to worship.

Single most unattractive thing men can do during sex

8 thoughts on “Prelate Urges Pilgrims To Be Good Ambassadors Of The Church.”