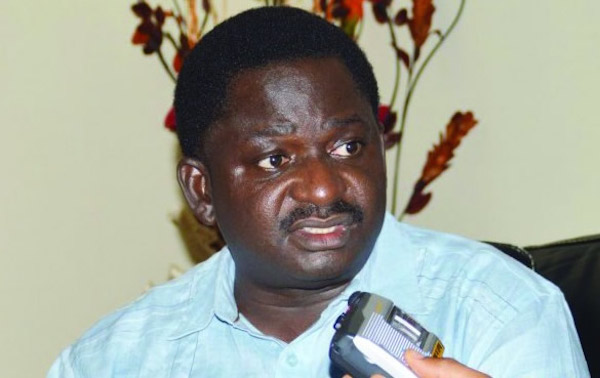 Mr Femi Adesina, the Special Adviser to the President on Media and Publicity, has urged Nigerians to ignore the media reports on coup plot, saying it should not be stretched beyond what the military authorities had said.

Adesina stated this at a media chat with State House correspondents to mark two years of the President Muhammadu Buhari-led administration on Tuesday in Abuja.

According to him, what the Chief of Army Staff, Maj.-Gen. Tukur Burutai, said about the issue was a “routine warning that goes to military officers.’’

The presidential aide addressed the correspondents alongside the Senior Special Assistants to the President on Media and Publicity, Malam Garba Shehu and Mr Laolu Akande (Office of the Vice-President).

Adesina said: “The Army has spoken and let us take that position. What the Chief of Army Staff said was a routine warning that goes to military officers, don’t hobnob with politicians and the army has explained the position.

“Let’s take that position and not stretch it beyond what the military has said because they are the ones that can give us the definitive position and they have spoken on it.’’

The presidential spokesman also debunked the assertion that the ruling party had failed in fulfilling its political obligations and promises to the electorate in view of the reported hardships being experienced by a cross section of Nigerians.

He maintained that it was unfair to assess the performance of the Buhari’s administration within its first two years.

“People can always express their opinions, there is liberty on that but you don’t have a scientific survey that has given you the percentage of people that believed that the APC has failed.

“The second point is that, when a government via a party is voted into office, it is voted for a four-year term under our own democratic arrangement.

“When you have spent two years which is like a midterm, the first half of a game, you don’t then determined that it has succeeded or it has failed.

“No. You can be accused of being atomistic using a small part to determine the whole. You can’t write the report card of this administration when it is just hitting the half way mark, that will not be fair.

“This administration will take Nigeria far beyond how it met it. So if anybody says APC has failed just tell them is too early in the day because is a four year-term and this is just two years. You don’t reach definitive conclusions in two years.’’

Malam Garba Shehu, who spoke on the Human Rights records of the Buhari’s administration, said the records were impeccable.

“The Human rights records of this administration are impeccable, there are unimpeachable. I think we should avoid speaking in general terms.

“The thing to do is to pin point specific cases to buttress assertions that people make and then we can tackle them.

“As we speak to you now, we are not aware that the administration of Muhammadu Buhari is in breach of the constitution of Nigeria with regards to the protection of the rights of Nigerians.

According to Shehu, the Buhari’s administration is complying with the decision of the courts of the land.

“I assure that if anybody tries to do otherwise the president will not allow him to get away with it.’’

Laolu Akande, who spoke on alleged weak prosecution of corruption cases across the country, said: “The truth of the matter is that our criminal justice system does need a profound and deep reform.

“The important thing is that this government is working on it. As a matter of fact now, the Acting President has put together a national coordination prosecution team for all the prosecution trying to see how in the medium term we can bring some progress.

“But also working on judicial sector reforms on the long term on criminal justice system to strengthen both the investigation and prosecution at the courts.

“And I know it is going to take a while for us to address it,” he said.

On food security, Akande revealed that the government had recorded tangible achievements in the nation’s agricultural sector.

According to him, the committee on food crisis is still working, while the government has reduced importation of food items especially rice.

He disclosed that about 40,000 farmers in Kebbi state had become millionaires due to government favourable agricultural policies.

Gov Lalong, Sports Minister In War of Words Over Buhari’s Visit To Benue