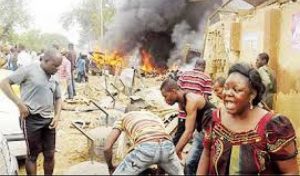 New security measures have been introduced by President Muhammadu Buhari to combat killings in Kaduna, Taraba and Benue states.

The President yesterday expressed outrage over the killing of 45 people in Birnin Gwari, Kaduna State at the weekend.

He said the killings were meant to “instigate war for selfish reasons”, adding that they are “not spontaneous”.

Buhari said: “I am deeply outraged by this unwarranted, unprovoked and reckless destruction of lives by bandits who belong to the lowest level of civilisation. I feel the pains and devastation of the families of the victims, and this administration will do everything possible to ensure we defeat these enemies of humanity.”

The measures to end the killings and general insecurity in the Middle Belt were stated in a statement by presidential spokesman Garba Shehu yesterday.

These include the confirmation that a new battalion of the Army and a new Police Area Command have been sited in Birnin Gwari.

The statement said: “The new Army Battalion and the Police Area Command are the latest in a series of law enforcement measures to ensure more effective protection of lives and property, in and around Benue, Kaduna, Taraba, Zamfara and Nasarawa states.

“Last week, the Nigerian Air Force took delivery of two new helicopter gunships, for deployment to parts of the country affected by banditry.”

A Quick Response Wing has been established by the Nigerian Air Force in Taraba State. A Joint Military Intervention Force is in Benue State..

Its spokesman Mukhtar Aliyu told the News Agency of Nigeria (NAN) in Kaduna that no arrest had been made, but that efforts were on to track down the killers.

He said that the policemen were detailed to comb the area for the killers and other criminals.

President Buhari also said security remained a priority of his administration, which he added would not tolerate the persistent killing of innocent people to set Nigerians against one another.

“These persistent killings are not spontaneous; there are subterranean forces with a sinister agenda to instigate war in the country for selfish purposes.

“Although unconventional war is particularly complicated, our security forces are making rigorous efforts to better understand these enemies with a view to decisively checkmating their evil attacks.”

In another statement, a reaction to the Peoples Democratic Party (PDP)'s accusation against the President on killings in the country, Shehu said: “What can President Buhari possibly gain from the killings? There is no intelligent angle from which you analyse the matter and see any possible gain for this government in the wanton destruction of life and property going on.

For the “new” PDP leadership on the other hand, incapable of thinking big about the nation, they see and treat the unfortunate spate of killingS of innocent Nigerians as political gift, about which they seem very happy to cite as the basis for a return to power. They feel bad at every turn the country improves, which is beyond comprehension. They should bury their heads in shame.”

He added: “The various lengths to which President Buhari has gone to end the spate of killings, such as mobilising state resources against the attackers, approving the setting up of new police and army formations in the affected areas, and the recruitment of thousands into the police and other arms of the military, are a few of the several steps taken , which a more reasonable opposition will acknowledge.”

US rap group Migos says Nigeria is a ‘third world country with bad English’, gets dragged