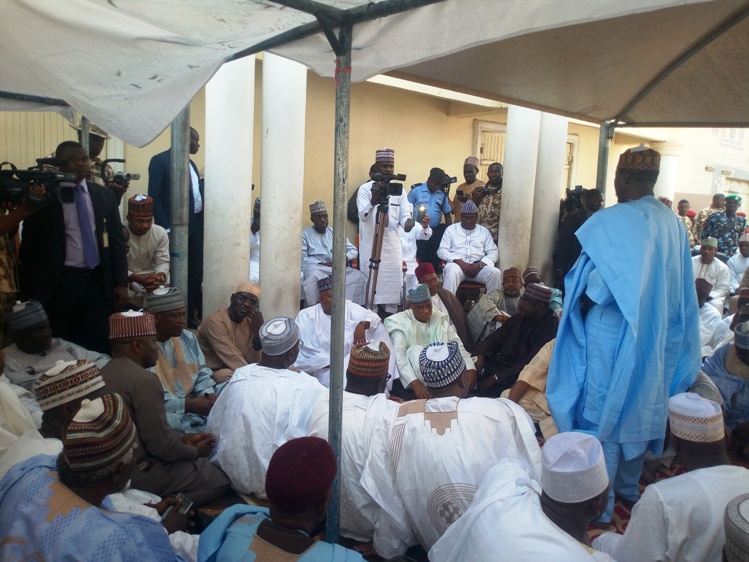 President Muhammadu Buhari has on Sunday sent second federal government delegation to attend the Third Day Funeral prayers of the father of COAS, Alhaji Yusuf Burutai who passed away early morning Friday at the age of 106 after a brief illness at UMTH Maiduguri, Borno State.

It will be recalled that the presidency had on Friday sent a first delegation that comprised of the National Security Adviser, NSA, General Babagana Monguno; Defence Minister, General Mohammed Mansur Dan-Ali; Chief of Air Staff,CAS, Air Vice Marshal Sadiq Abubakar; Minister of State for Works, Housing and Power, Hon. Mustapha Baba Shehuri; and Chairman, Senate Committee on Defence, Senator Abu Kyari among others.

The second federal government delegation was headed by the Chief of Staff to the President, Alhaji Abba Kyari who arrived Maiduguri 9 am on Sunday to attend the three days funeral prayers of the deceased centenarian, Alhaji Yusuf Burutai.

Abba Kyari was accompanied by the Senior Special Adviser to the President on media and Publicity, Alhaji Garba Shehu; former Secretary to the Federal Government, SFG, Ambassador Babagana Kingibe, among others.

Kyari said in his condolence messages that President Buhari sends his heartfelt sympathy over the death of the deceased elder statesman who lived a good life of service and sacrifice.

He urged the bereaved COAS, his family and relations to bear the irreparable loss appealing to them to continue to offer special prayers to the late elder – Baba.

In his condolence message, Governor Kashim Shettima of Borno state thanked President Buhari for sending two different delegations since the demise of Yusuf Buratai on Friday.

“This is a clear demonstration of the love the president has for the people Borno state and we are eternally grateful for his kindnessa�?.

a�?Death is inevitable and very painful. But what is more painful is for the bereaved not to have people around them during the time of their bereavement. But we are very happy that the Chief of Army Staff and his family never lacked such great company of well-wishers at this moment of grief.

a�?The mammoth crowd of people that have besieged this home since Friday was not because the deceased was a father to an Chief of Army Staff. No, it was rather a clear testimony of the kind of man the deceased was all his life. He served the world and has lived peacefully with his people. May his soul rest in peace,” Shettima said.

Late Yusuf Buratai was a veteran of World War II after enlisting into the West African Army at the age of 18 in 1942. He is survived by 15 children among whim is the COAS and many grand children.