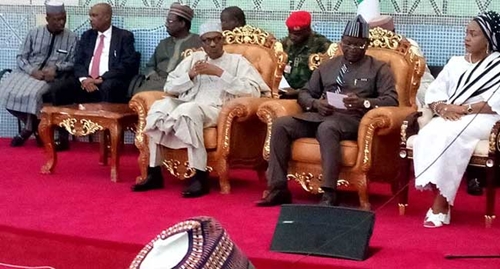 President Muhammadu Buhari on Monday was surprised at the revelation that the Inspector-General of Police, Ibrahim Idris, did not spend 24 hours in Benue, when he directed him to relocate to the state and remain there till peace was restored.

Buhari had asked Idris to relocate to Benue shortly after 73 persons were killed in January by herdsmen. But when he visited the state on Monday, the president was told that Idris did not spend up to 24 hours in the state.

a�?I am getting to know this in this meeting. I am quite surprised,a�? he said.

He, however, said that the meeting was not the best place to expose the inefficiency of his appointees, and appealed to Benue people to exercise restraint and live in peace with their neighbours.

President Buhari on March 5 commenced an official visit to Taraba, Plateau and other states of the federation affected by security crisis for an on the spot assessment of damages caused by herdsmen-farmers clashes.

Buhari said that government was deeply worried about the incessant attacks on Benuea��s rural communities, and vowed to end the menace a�?very soona�?.

The president, who met with farmers, herdsmen, government officials and other stakeholders in Makurdi, denied insinuations that he was not interested in what was happening to the North-Central state.

a�?I cannot overlook the killings in Benue or any other part of Nigeria. I cannot do that. I am genuinely worried about the attacks in Benue and we are doing everything to end them,a�? he said.

He said that the insecurity in some states was a major concern to his government, adding that concerted efforts were being made to restore normalcy to every part of the country.

Speaking earlier, Governor Samuel Ortom told President Buhari that the only solution to the killings in Benue State was to fish out the perpetrators of the crisis, particularly the leadership of the Miyetti Allah Kautal Hore and the adoption of the ranching system for cattle rearing in Nigeria.

He said Buhari could review the current exercise CAT race (Ayem Aa��Kpatema) by the military in the state by upgrading it into a full military operation in order to give specific directive that could lead to tackling the herders-farmers clashes in the state.

Ortom also lamented that as it is presently, no fewer than 170,000 persons have been displaced and are being housed by the state government as internally displaced persons (IDPs) in different camps as a result of the attacks.

He said 60 percent of the IDPs were sadly children who ordinarily should have been in school.

a�?Your Excellency, we plead with you to take steps to reduce the sufferings of these over 170,000 countrymen in the eight internally displaced camps. The Federal Government should compensate them and assist in the rebuilding of their homes as promised by the committee on displaced people headed by the vice president.

a�?The primary, secondary schools, health centres and churches destroyed in several communities should be rebuilt for use again,a�? he added.

The governor denied allegations that the Benue State government was keeping and training a militia group to fight Fulani herdsmen in the Benue.

a�?As a born again Christian and someone who believes in the fear of God, I cannot and we have never encouraged the establishment of any militia group,a�? he said.

The Tor Tiv, Professor James Ayatse, who also spoke at the event urged President Buhari to re-consider the redesigning of the countrya��s security architecture with the states and traditional rulers having a role to play.

He said aside taking steps to address the security crisis in Benue, it was important for President Buhari to increase federal presence in the state.

River Benue to create more economic activities for increased jobs for the youths.

Speaker of the Benue State House of Assembly, Terhemen Kyange, called on President Buhari to intervene in the reconstruction of federal roads cutting across the state that are in bad sharp.

They also advised the president not to see Governor Ortom as an enemy who is bent on executing a law that is unfriendly to Fulani herdsmen, but as a patriotic leader who is carrying out the wishes of his people.

Nurses In Calabar Beat Up Woman In Labour ‘Because She Couldn’t Afford N20,000 Bill’