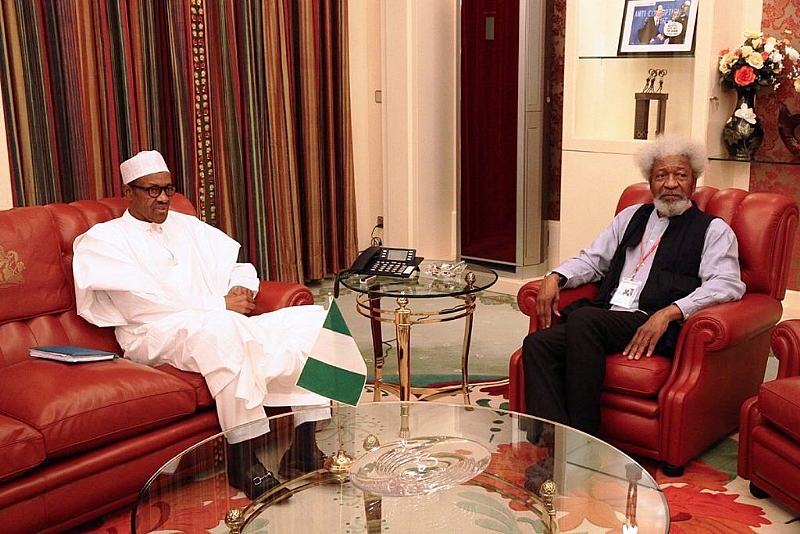 Prof. Wole Soyinka, has described President Muhammadu Buhari has being under a trance, while responding to a question on the three things he would tell the President if he meets him.

a�? I will say Mr. President you are in a trance, he said.

a�?I dona��t know. So many unforced errors. Take for instance the suspended Executive Secretary of the National Health Insurance Scheme, Usman Yusuf, reinstated by the President.

He said the sooner the President got out of the trance, the better for the nation.

He said Mansur Dan Ali, minister of defence ought to have been sacked.

He also challenged the federal government to set a date when herdsmen would be disarmed.

He advised Nigerians to unite and prevent armed herdsmen from wreaking havoc in their communities.

Soyinka said people have two lines of action to take when they sight armed herdsmen: a�?One, report to the police, then disarm the herder.a�?

Many in Nigeria have argued that President Buharia��s response to herdsmen attack parallels former leader Goodluck Jonathana��s handling of Boko Haram: too little, too late, suggesting disengagement or even incompetence.

Nigerians who spoke to Per Second News have pleaded for a more forceful and decisive reaction, with harsher consequences for the calamitous herdsmen.

Our cries fell on deaf ears: Kaduna CAN chairman

58 thoughts on “President Buhari under a trance: Prof. Soyinka”