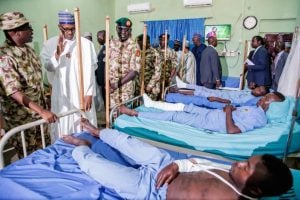 The soldiers are part of the high casualty reported in the attack on soldiers at Metele, Borno State which sources indicate claimed the lives of up to 100 soldiers, though military authority is yet to release the official figures.

Buhari’s visit to the state, which  primarily  to declare open the Chief of Army Staff annual conference in Maiduguri, is coming 10 days after the attack, which put a lie to claims by the federal Government that the Boko Haram insurgency had been defeated.

The president while in the state also met with other troops of the Operation Lafiya Dole at the theatre command fighting insurgency in the north-east region to boost their morale.

Buhari wrote about the visit on his verified Twitter handle.

“Today in Maiduguri, I visited our wounded troops. Across the Northeast, we have officers and men fighting bravely and tirelessly to keep our country safe from terrorism and violence. I salute their sacrifice on our behalf. And may the souls of the fallen rest in peace,” he said.

Buhari while in Borno also visited the palace of the Shehu of Borno, Abubakar Ibn Umar Garbai Al-Amin El-Kanemi.

Some highlights of the visit were captured in pictures,

Abia Govt. To Establish International Market Outlets For Made In Aba