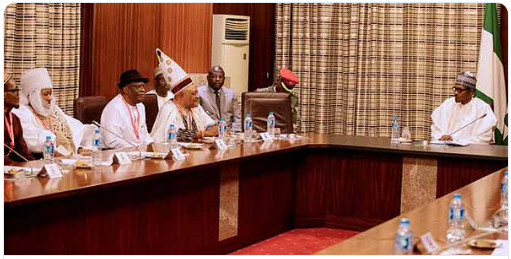 The President spoke about the nation’s unity on Thursday when he received Eze Abdulfatah Emetumah III, the Offor of the Umuofor Kingdom and the Chief Imam of Oguta LGA, Imo State, a statement by his spokesperson, Mr Femi Adesina said.

According to the President, the Federal Government is ready to contend with “anyone who is against the peace and unity of Nigeria.

“Anybody that tries to joke with the unity of this country has a problem as long as we are alive,” he warned.

The President explained that the he was elected into power to make the country better, stressing that he was keen to play the role.

“Our single objective is how to make Nigeria better and we will never get tired,” he said.

President Buhari thanked the delegation for identifying with the progress made so far by his administration in moving the nation forward, and assured them that their well thought out recommendations on engendering unity in the country would be considered.

In his remarks, Eze Emetumah commended the President for demonstrating his love for Nigerians and Nigeria through purposeful leadership in the last three years.

He said, “Your Excellency, from birth, you have a mission for Nigeria and you, have demonstrated this in your career as a soldier, Minister, Head of State, in PTF and now President.

“You have fought for the unity of this nation and its enemies, we know very well that you won’t tolerate anything that would affect its unity and our collective existence”.

According to the royal father and cleric, it is noteworthy that under the present administration, ‘‘dissemblers like Boko Haram and other anarchists have tasted the bitter pills’.’

“In agriculture, today locally produced rice has outnumbered the imported, while critical infrastructure especially Federal roads across the nation have improved and are still improving,” he added.

90 thoughts on “President Muhammadu Buhari has threatened to deal with those toying with the unity of Nigeria.”