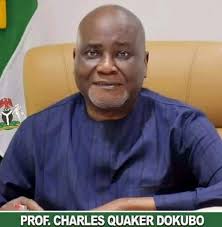 Leaders of former militants in the Niger-Delta region, who pride themselves as ex-Agitator-Generals, have kicked against an alleged conspiracy against the Coordinator of the Presidential Amnesty Program, Professor Charles Dokubo.

The ex-agitators mostly drawn from Camp Farah, said the amnesty program has improved under Professor Dokubo.

Dennis Fayeofori, who spoke on behalf of the ex-agitators generals, said those from Camp Farah and Movement of the Emancipation of the Niger-Delta, were in support with Professor Dokubo.

They appealed to President Muhammadu Buhari to approve more funding for the Amnesty Programme to meet the objectives of ex agitators.

According to them, “We the ex- Agitator-Generals of the Movement for the Emancipation of Niger-Delta People, MEND Camp Farah, Rivers state in collaboration with the Kalabari Indegenous Movement are shocked and saddened by the recent desperate moves of some unscrupulous people within the Niger-Delta region to tarnish the good image and office of the Special Adviser to the President on Niger-Delta and Coordinator of the Presidential Amnesty Programme, Prof. Charles Quaker Dokubo.

“This calculated plot against a well-respected son of Kalabari and Rivers state is simply aimed at getting him out of office for changing the dictates of unseen godfathers and was used as a conduit pipe to siphon and divert billions of money meant for the scheme into private pockets.

“We condemn this sinister move in its entirety and warn perpetrators and sponsors to desist from such despicable act which is capable of causing disaffection among member-states of the programme.

“We wish to note that the Kalabari and indeed Rivers people have supported other states when it was their turn to head the Amnesty Programme and we will not sit back and watch mischief makers blackmail and pull down our own.

“Prof. Charles Dokubo is a man of integrity and we have full confidence in his ability to take us to the next level of greatness. Since he took over on March, 2018 he has ensured prompt and regular payments of allowances of Amnesty beneficiaries as well as carried out several training programmes for many others.

“We are compelled to recall that from the establishment of the scheme by Late President Umar Musa Yar’Adua in 2009 till date, the Presidential Amnesty Programme has been headed by Rtd. Brig.Gen Godwin Abbe from Edo state, Timi Alaibe (Bayelsa State), Kingsley Kuku (Ondo State) and Rtd. Brig-Gen Paul Boroh (Bayelsa state). All of these mentioned people had the full support of Rivers people and it would be fair and just that same gesture be extended to Prof. Charles Dokubo.”