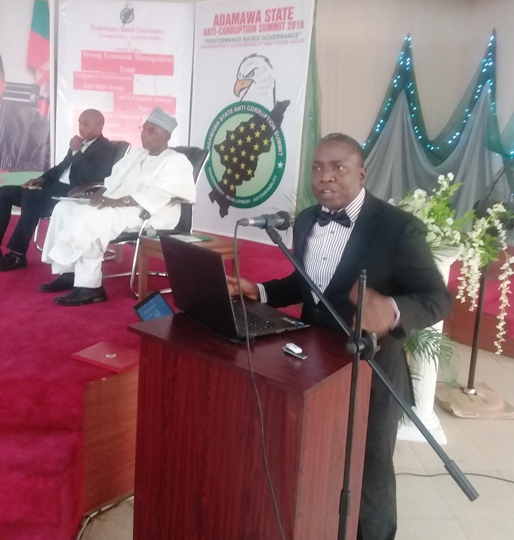 More emphasis should be placed on preventive measures if Nigeria is to make significant headway in the fight against corruption. This was the submission of the acting Chairman of the Economic and Financial Crimes Commission, EFCC, Ibrahim Mustafa Magu, Wednesday February 21, at the ongoing 1st Anti-Corruption Summit organized by the Adamawa State Government in Yola, the state capital. Magu who spoke through the Commissiona��s spokesperson Wilson Uwujaren observed that, commendable as the current emphasis on enforcement activities is, it will be more profitable to prevent corruption rather fight it. He noted that the emphases on prevention was in tandem with the United Nationa��s recommendation, which advocates that 60 percent of the anti corruption activities should be on prevention.

He emphasized that, unlike some states government that are suspicious of the EFCC and see the fight against corruption as a federal agenda, the EFCC had collaborated with the Adamawa state government in prosecuting corruption cases, the most notable being the prosecution and conviction of a former governor of the state, Bala Ngilari, which was done in record time.

Earlier, the state Attorney General and Commissioner of Justice, Bala Sanga took the audience through the justice sector reform of the Adamawa state government with emphasis on the modernization of the state judiciary, enactment of new laws and enforcement of transparency in the procurement process.

He disclosed that, though the state has no investigation agency, it has concluded investigation of fifteen corruption cases while efforts are being made to enact a Proceeds of Crime Act, POCA, which will be the first in the country. The Commissioner further disclosed that the state was at the verge of passing the Administration of Criminal Justice Act which will ensure speedy determination of cases in court.

8 thoughts on “Prevention Critical to Fight Against Corruption – Magu”