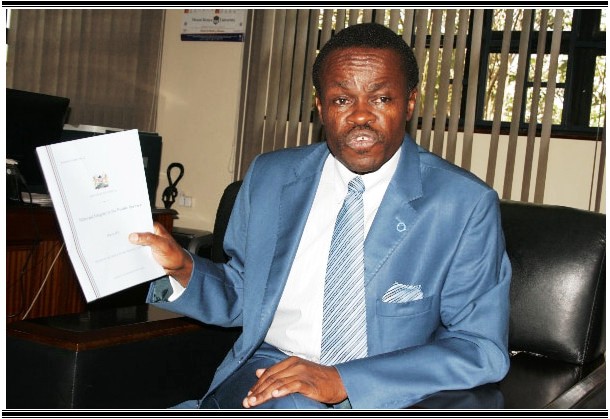 Professor Patrick Lumumba is a well respected academic on the entire African continent. There is no doubt about that. A Kenyan who served as the director of Kenya anti-corruption commission for just one year, from September 2010 to August 2011, he is currently the director of Kenya School of Laws, a position he has held since 2014. An eloquent orator, he holds a d octorate degree in Law from the University of Ghent in Belgium. He is a committed Pan-Africanist and has delivered several powerful speeches on how Africa can solve its problems the African way.

In one such speech, Lumumba diagnoses what he designates “Africa at the dinner table”. He presents the picture of Africa as a piece of meat and on the dining table to enjoy the food are former colonial masters, France and the United Kingdom, the USA, the European Union, China and progressively, the Arabs.

Professor Lumumba also talks of the hotspots on the African continent which are interminably in conflict, in various intensities. Among these are Somalia, Northern Mauritania, Northern Mali, Central African Republic, Democratic Republic of the Congo, Guinea Bissau, Cameroon and Southern Sudan.

The respected professor mentions a photograph one of his friends sent to him on the recent meeting of the Commonwealth of Nations heads of government which his friend describes as a meeting of equals. And Lumumba says he disagrees with his friend on that. His postulation is that in the eyes of Britain, her former colonies are still under her tutelage. Otherwise, he argues, why has the leadership of the Commonwealth remained hereditary and not rotational? The colonial power has not left Africa, Professor Lumumba contends, stressing that unless these powers are checked, they would definitely come back to haunt the African continent.

The truth, however, is that the vestiges of colonialism are never so easy to discard. Even with all its ability to muscle flex other countries to get at its goal, a country like Britain has not found it necessary to divest its society of all the adornments that remind British people that they were once a Roman colony. That is why most of the mottos of their institutions are still in Latin. For instance, the University of Aberdeen has as its motto “Initium sapientiae timor domini” which means “The beginning of wisdom is the fear of the Lord.” Birkbeck University of London’s motto is “In nocte consilium” meaning “In night is counsel”. The University of Birmingham’s motto is “Per Ardua Ad Alta” which means “Through efforts to higher things”. Bournemouth University’s motto is “Discere mutani est” which means “To learn to change.” Imperial College, London has its motto as “Scientia imperii decus et tutamen” which means “Knowledge is the adornment and safeguard of the Empire.” Kings College, London has its motto as “Sancte et sapienter” meaning “With holiness and with wisdom”. Queen Mary University of London’s motto is “Coniunctis viribus” meaning “With United Power” and London School of Economics and Political Science has its motto as “Rerum cognoscere causas” meaning “To understand the causes of things”. Even the Royal Stool of England has its motto as “Dieu et mon droit” meaning “God and my right”

Much as I have my regards for Professor Lumumba’s views of the many problems that challenge Africa, I think there are a lot of things missing out here, or rather much that Africans ought to own up to. But rather we sweep them under the carpet or place the blame on the next doorstep. But before we come to these, it might be worth the while to quietly clarify some of the points Professor Lumumba raised in his discourse.

If any country feels it can no longer belong to the organisation on account of its leadership or for any other reason for that matter, that country is free to opt out, just as the Gambia did some years back. The point, I think, is that member-nations are satisfied with the leadership and have so far seen no need to challenge it.

About Africa’s hotspots, we need to get back to historical facts. The problems of communal and boundary clashes in African countries are very fundamental, and they call for an understanding of their origin by African leaders. For instance, it is well known that Africa had as many as 10,000 different states at some point in its history. These nation-states still feature in many of the modern African countries, characterized by their methods of social administration.

There is a dire need for African leaders to work towards finding solutions to the frequent national crises which have taken great tolls in human lives and on the economy across the African continent. They must map out clear solutions to these rampart clashes, a blueprint that will guide politicians to find a lasting solution to these socio-economic problems. They must find a way of connecting stakeholders and getting them to make the truce so that members of African communities can spend their time making themselves more relevant to the needs and aspirations of their people. Again, the bitter truth is that only we can do this for us.

Indeed, I am always disgusted that African nations tend to lay the blame for their woeful failure at the doorsteps of other countries. In my article titled “Rediscovering Africa” and published in the Cameroon Web of Friday 6 March 2015, I noted that myriads of social, economic and political problems have continued to take their toll on the African continent over the last century. And people are beginning to worry. What brought about Africa’s so many social and political problems? We need to know why we are in the situation we find ourselves today.

If indeed Africa was the first continent humanity resided in, and if indeed Africa was the first continent to be civilised, why are we now regarded as the “third world”? At what point did we miss out? Where did we go wrong? And how can contemporary leaders of Africa review and redefine their roles in order to facilitate the continent's self actualization in the face of the current threats of terrorism and global uncertainty?

Difficult as it seems, the hard fact that will count is that unless African political, traditional and religious leaders truly recognize the reasons why Africa has remained underdeveloped despite its magnificent history, it will be extremely difficult to develop the continent, socially and economically, to take its rightful position among today's comity of nations. And when we recollect that Africa is the second largest and second most populous continent in the world, covering about 20.4% of earth's total land mass, with a population of about 1.1 billion people as at 2013, accounting for about 15% of the world's entire human population, then we begin to have an idea of the enormousness of our challenge. But to deal with the dilemma of African nations, we must first recognise her ailments.

Talk of slave trade. It was there in Africa before the advent of the Europeans. What the white people did was to extend its scope and perhaps its intensity. Before they arrived, African communities fought against each other, captured their enemies and enslaved them. That was the practice all the way from Egypt in the North to Rhodesia in the South. So, if the white men came with bottles of gin in the one hand and a gun in another and they offered them to Africans to use and fight themselves and bring slaves among themselves for the white men, who do we blame?

Most Africans tend to blame the ex-colonial master when things go wrong because Africans refuse to realise that we live in a world where many countries do not toy with the fate of their business communities. A country like Britain or France will go to war in order to provide business opportunities for their business community – which is why countries like Iraq and Libya were invaded. Their oil was the price. Their people, the citizens were the medium through which the aggressor would make his money and win the medal. As far as these countries are concerned, they must sell their weapons. And if they can lobby you, Africans, to fight each other so they can sell their weapons to you, they will do so. After all, they are in business and those buying the arms are supposed to be independent countries. Their leaders ought to know what is good for their people.

What I am saying in effect is that no country can stop another from developing. Britain, America, China and what have you? None of them can directly stop any African country from developing. Only Africans can stop themselves from growing by sabotaging each other. And the reason can be found in the history of the continent and the mindset or psychology of its political, traditional and religious leaders.

Despite the lessons the history of Africa has heaped on our feet, we don’t seem to have learnt anything. Whether they are heading the traditional communities, the church or the government, the behaviour and values of these African sets of leaders do not differ much from one another these days. And if there is one word that can define them, that word is “greediness”. African leaders are extremely greedy. The governments are not transparent in their dealings. Bribery and corruption are the rule rather than the exception in most of our African countries. Betrayal is the name of the biggest challenge. Give an African some huge sum of money and he will be willing to sabotage even his own mother or father for it. Trust is no longer a virtue in Africa. So, why do we have to blame other countries for our failure? We are not being fair to them.

If Africa is the meal and the UK, USA, EU, China and the Arab world are seated in readiness for dinner, look under the table. There must be an African there, ready to eat the crumbs that may fall from the masters’ table. Yes. There must be an African. So, unless we fight sabotage, greed and self serving tendencies among African leaders, unless a new breed of leaders are mentored who will stand shoulder to shoulder with the progressive nations of the world and deal ruthlessly with saboteurs among their own, it will be extremely difficult to develop Africa.

In Nigeria today, many people regard the late General Sani Abacha as the most ruthless dictator that ruled the country. But only very few know that the so-called ruthlessness was the reason no Nigerian would risk taking money from any foreign country to sabotage Nigeria. He was the reason that for a long while after his death only Africans were left to determine the fate of Africa. Abacha would not only kill you, he would kill your entire family and all your known kith and kin if you were implicated in an attempt to take money from a foreigner to sabotage your own country. So, perhaps what African nations need is someone with General Abacha’s mental attitude and approach to world politics. And I think that people like Professor Lumumba should key into this.

Development In Nigeria: The Creative Involvement Of The Youth

11 thoughts on “Professor Lumumba Should Key Into This”