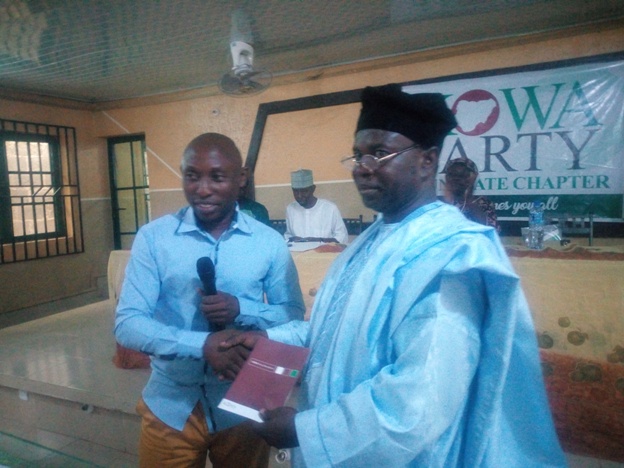 The KOWA party in Osun State has picked Professor Olusseyi Fabiyi of the Kampala International University as its candidate for the September 22nd governorship election in the state.

Professor Fabiyi emerged as the candidate of the party unopposed at the primary of KOWA party held in Oshogbo, the state capital after the postponement of the congress of the party due to suspected discrepancies in the list of the contestants for positions in the State Working Committee of the party.

The primary election of KOWA party which produced Professor Fabiyi was conducted by the National Organising Secretary of the party, Mr Igwe Chukwud on behalf of the National Working Committee of the party and observed by the leadership of the Inter Party Adversary Committee (IPAC).

Members of the party in the state, including the former presidential candidate, Professor Remi Sonaiya expressed satisfaction on the process that produced professor Fabiyi as governorship candidate of KOWA party.

The National Publicity Secretary of the party, Mr Kunle Lawal told members of the party that a new date would be announced for the congress and the current executives of the party under the leadership of Mr Akinyemi Akinwumi would remain in office on acting capacity.

The son said he was determined to win the forthcoming governorship election and reposition the state for the betterment of the people.

According to him, “today marks the beginning of a great journey towards emancipating our state from political jobbers who bestrides our state political landscape in the past, like a colossus and constrained us to our knees to live on crumbs from their oppressive tables.

“It is a journey to a place where people will be voted into political offices; not on the basis of where they are born or the religion they profess or the amount of money they can dispense to buy voters but on the content of their manifestos, the idea about governance and the quality of their characters.

“I am a son of a school teacher; my father currently lives on moderated pensions and the support from us, his children. If I can aspire for the number one citizen of the state; I see hope for the youth and the masses in our dear state that anyone with great idea can govern our state without a link with the money-bags and treasury looters .

“I see hope one day the children of peasants and downtrodden will one day aspire and brave the odds to contest for highest office in our land. Political office is not the exclusive preserve of the children and associates of the elites, but for the people with great minds, great ideas and empathy to better the lives of the people; the qualities that are very scarce among the current political class.

“We should join hands to rescue our destinies from the hands of businessmena��politicians who have turned our lives to cesspool and engage in horse-trading, selling us as chicken in the trade-mall of politics for their personal economic advancement leaving us in servitude and perpetual misery.

“The focus of their policies programme and projects are best described as anti-people which leave us in pain and despondency. We grope under their huge legs to lead a miserable and dishonorable lives. There is a conspiracy between the elites and the politicians against the masses and we must be liberated and rescued. That has to be done as fast as possible if we must survive the onslaught.

“The forth industrial revolution has brought about significant disruption that affects all sectors of economies and governance, therefore the running of government in the developing countries requires sound foundation of economic philosophy that will drive development. It entails programmes, policies and projects that will stir rapid micro economic growth among the citizens and thus improved their productive capacities.

“Osun State is endowed with abundant, natural, human and intellectual resources that can be engaged and deployed for the betterment of our lives and residents in the state. We must rescue our state from the so-called experienced politicians who have no credentials to parade other than their experience in stealing our common resources and to bribe us during campaign to buy our consciences and seal our destiny at the poll. They have succeeded repeatedly because of our precarious condition which was as a result of their mis-governance in the past and they are ready to trick us again into another four years of misery, poverty, hopelessness and despondency.

“Let us show the Omoluabi quality in us and let them know that we are no fools and that they cannot take us for a ride any longer. Let us massively vote them out in the forth-coming election and retire the so-called experienced politicians whose actions and inactions in the past have relegated our state to one of the most indebted states in Nigeria, occupying 35th position in the financially sustainable index ranking among the 36 states in Nigeria.

“KOWA Party has come to show the modern ways of governance with human face and the focus on the people. Osun has 4.5 million people, different types of agro, mineral and intellectual resources. We shall bring on board great capacity to govern with integrity, fear of God, vision and sound development economic programmes.

“In fact Osun State has nine (9) universities churning out great minds every year, yet these resources have not been properly harnessed to better the lots of the citizen.

“Today, we begin a journey to our dream land. KOWA has become a divine truck that cannot be stopped and a moving train that everyone must join. I am happy to be at the driver seat on the great voyage and I am confident that we shall arrive at our glorious destination gracefully by the special grace of God. It is not by power nor by might but by the special grace of God.

“I speak to the youth; you are the largest voting population in Osun State. Despite the position you hold in securing positions for political office holders, yet the usual appointments often reserved for you by the political elites are brigandage, thuggery, praise singing and at best, personal assistance to members of their households. Please take your future seriously as I planned to adopt 60/40 principle which means 60% of the political appointments in my government shall be given to people below 40 years of age.

“Therefore dona��t sell your future for a pot of pottage as the proverbial Esau who for a pot of soup sold his birthright. I will also donate 50% of my salary to fund special entrepreneurial innovations by youth under 40 years which shall be given as grants for innovative entrepreneurial projects.

By the grace of God Almighty, KOWA will form government in November 2018 and we shall hit the ground running with our three fold agenda which we named as TEA.

“The Mission of TEA agenda is to restore hope of the people of our dear state and kick start rapid micro economic development through investment in critical sectors that directly affect the peoplea��s quality of life. TEA was borne out of extensive studies of the economic and development policies of different emerging countries that moved from precarious economic condition to become global players.

“TEA is the acronym for Technology revolution for industrial development, Entrepreneurial empowerment for large scale businesses and Agricultural modernization. “Apart from TEA agenda which we promise to pursue passionately, we have the mandate to expressively expand our horizon by giving due diligence to other areas such as: education, infrastructures, culture and tourism and civil service”, he said.