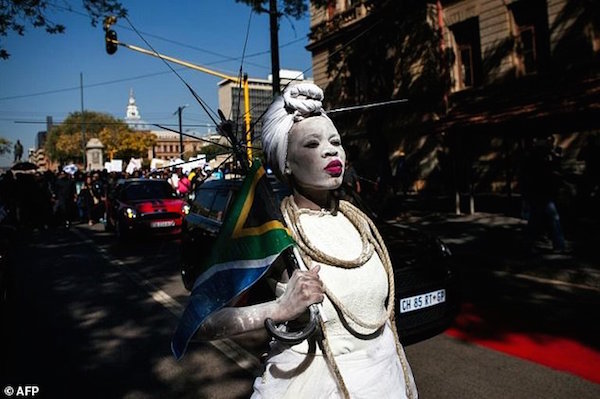 #NotInMyName – Hundreds of protesters took to the streets of Pretoria on Saturday, angered by a rise in violence against women and children in South Africa, including killings and sex attacks.

Answering the call by a group calling itself “#Not In My Name” the protesters, most of them men, marched through the streets of the South African capital behind a woman symbolically dressed head to toe in white.

“The time to take collective responsibility for our shameful action is now,” said Kholofelo Masha, on of the protest organisers, who described himself as “a loving dad, brother and uncle”.

South African men have remained quiet on the issue for too long, he added: “You hear a lady screaming next door, you decide to sleep when you know there is a problem next door… No man should beat a woman or rape a woman while you’re watching”.

Reports of the rape and murder of women and girls have been front-page news recently in South Africa, which has some of the worst crime rates in the world.

According to official figures, a women is killed by someone she knows every eight hours somewhere in the country and one woman in five has been subjected to at least one act of violent aggression in her life.

The killing of Reeva Steenkamp by her boyfriend, Paralympic athlete Oscar Pistorius, drew global attention to the issue of domestic violence in South Africa.

South African President Jacob Zuma on Thursday visited the home of the parents of a three-year-old girl who was raped and killed.

“We as the citizens of this country must say enough is enough,” Zuma said then. “This is one of the saddest incidents I’ve come across. It’s a crisis in the country, the manner in which women and children are being killed.”

The ruling African National Congress has called the wave of violent acts “senseless and barbaric” while the main opposition Democratic Alliance party has denounced the “failure to make South Africa safe for all,” and has called for a national debate on the problem.