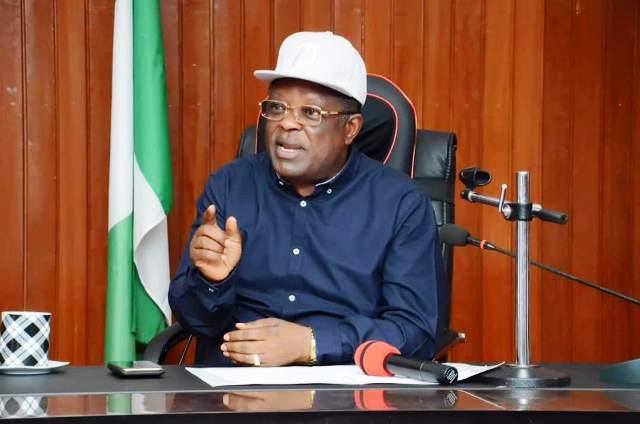 Ebonyi State Governor, Chef David Umahi has called on Nigerians to genuinely pursue zero-oil economy or diversification inorder to insulate the economy from the risk of being vulnerable to a single commodity, as the different oil prices crashes have shown.

The Governor made the call in a lecture he gave at the University of Nigeria Nsukka (UNN), Enugu state as part of the activities marking the 59th Founders day of the institution.

Sneaking on the topic ‘preparing Ebonyi for tomorrow’s zero oil economy’, Chief Umahi said that Nigeria, a country of over 180 million people is heavily dependent on oil for its income, a situation he warned cannot be allowed to continue.

He noted that most nations of the world are not dependent on oil, argued that with proper investment in physical and human development, Nigeria can survive without relying on oil and may even grow faster.

“There are probably 3 reasons why Nigeria needs to genuinely pursue zero-oil economy or diversification:

“First is to insulate the economy from the risk of being vulnerable to a single commodity, as the different oil prices crashes have shown.

“Second is to create jobs that can raise the living standard of an average Nigerian. Oil and gas jobs account for less than 1% of total employment and the young population can no longer be absorbed by the public sector.

“Third is to prepare for life beyond the oil revenue”.

He also said that for the country to survive, government at all levels should urgently create an enabling environment that will favour diversification of the economy that will de-emphasize mono-economy system and pay more attention to heterogeneous economy.

“There are great opportunities for non-oil sectors to grow and this growth has been visible since 2001. Of course, the changes cannot be that quick and the transformation cannot happen overnight. The country can develop different sectors by taking the important steps from the government’s side”, he said.

Chief Umahi, however, noted that the country must be restructured if it must survive the post oil era.

“It is crystal clear that a restructured Nigeria based on a zero oil economy will consequently transform into a Nation with a different constitution in which the exclusive list and concurrent list will look dramatically different from what it looks like today”.

“The primary burden of governance, development and the general welfare of the citizens will rest on the component states. The recent price crash of international oil prices, staring from June 2014, significantly constrained national earnings and slowed our growth, demonstrating once again, the vulnerability of building our economy only on oil”, the governor said.

Chief Umahi further warned that governments at all levels in the country must must begin to ensure that all revenues from oil are applied only to infrastructure development.

“It is sub-optimal for Nigeria to be using its oil wealth to fund recurrent expenditure. This promotes a dependency culture that stifles innovation, creativity and productivity. It also encourages a bloated governance system with the attendant high cost of governance”

“If we are to insist that recurrent expenditure must be funded from non-oil revenue, it will focus the minds of governments a lot more and drive productivity. It will also make the imperative to improve tax collection more urgent, which will in turn drive accountability as citizens start to ask what is being done with the taxes they pay”, he said.

The governor noted that there is need to empower the Bank of Industry, Bank of Agriculture and other Development Banks to create soft loans for farmers and entrepreneurs

He said that in Ebonyi, his government have started preparing for zero oil economy.

“The journey will be a long and difficult one but we are laying the foundations for sustained economic growth and prosperity in our state, beyond the era of oil.

“We have made the modest strides we have made in our state through a combination of prudence, preparation for the future and diversification of our economy beyond oil”, Mr Umahi said.

I have choosen to publicly thank you for so readily obliging our request to be the guest lecturer at today’s event. Am aware that this is your first official visit to the University of Nigeria.

Earlier, the Vice Chancellor of the Institution, Professor Charles Igwe commended the Governor for choosing the topic which he described as apt and forward looking.

“Our Founders’ Day Lecture remain the most prestigious of the public lectures that take place at the University of Nigeria. It is an ideal platform for discussions on topical issues of national and international relevance. Thus, it is not only about celebrating the past, but also about preparing for the future”

He commended the governor for the good job he is doing in Ebonyi state which he noted has earned him many admirers in the university.

Buhari Is Weak, Nigeria Is In Free Fall And Free For All