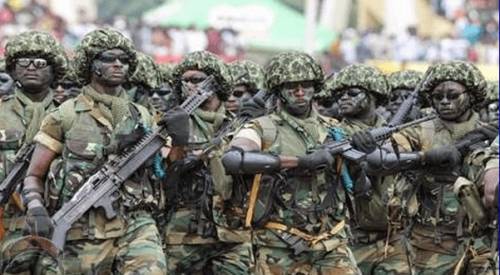 (Chima Ubani Center, Onitsha Nigeria: 28th December 2018)-The recent skewed selection along ethno-religious lines, on orders of the outgoing Inspector General of Police, Mr. Ibrahim Kpotum Idris, of no fewer than 167 police officers drawn from various squadrons of the Mobile Police Force unit of the Nigeria Police Force for counterinsurgency operations in Northeast Nigeria is not only an eye opener but also a clear indication that the entire counterinsurgency operations are fundamentally riddled with unearthed controversies impatiently demanding for demystification.

Apart from stiff protests or opposition trailing the skewed selection, on account of its glaring ethno-religious bias or lopsidedness, the Nigeria Police Force which initially engaged in defenseless denials of such reports; somersaulted and announced the dismissal of 121 of the 167 police officers. The NPF authorities had while announcing their dismissal accused them of “mutiny” and desertion”.

Intersociety carefully investigated the list and found that out of the affected 167 police officers comprising those in the ranks of Inspectors and Sergeants, officers of Igbo Ethnic Nationality are in majority with not less than 50, followed by those of the Yoruba Ethnic Nationality with 42. Not less than 65 others come from the South-south geopolitical zone and old Middle Belt region.Intersociety also found that over 85% of the 167 police officers belong to the Nigerian Christian Faith and other non Muslim religions. Shockingly discovered too was that out of the 167 affected police officers, only ten are drawn from the Nigerian Northern Muslim population.

Are there truly counterinsurgency operations going on in Nigeria or disguised “counterinsurgency operations” in furtherance of Jihadist motives or agendas? Are the Nigerian Army, Nigerian Air Force, Nigerian Navy and the Nigeria Police Force and their present headships truly non-ethno-religiously partisan and pluralistically composed? Are there Islamic or extremist cells presently operating or being operated within the named Nigerian security forces or establishments? Are there acutely entrenched ethno-religious biases or sentiments by the present headships and in command and control of the Nigerian Armed Forces and the Police? Are there ethno-religiously radicalized saboteurs within the ranks of the country’s security forces especially among their headships and those in charge of planning and execution of the counterinsurgency operations in Northeast Nigeria?

Are there situations whereby non-Muslim officers and combatants are sent to the insurgency’s hotspots including the entry points of the Nigerian-Chadian borders with firm offensive attack orders but retroactively get sabotaged with their fatality consequences blamed on Boko Haram or ISWA insurgents? How many Nigerian military personnel have been killed through in-service conspiracies, if any, or in genuine insurgency attacks? Are the real numbers or figures of those killed being disclosed publicly by the authorities or mangled or brutally doctored? Why are young officers especially graduate officers from the Southeast and South-south who have barely put in 12 years or less in the service leaving the military especially the Nigerian Army in droves?

What are the real motives of the outgoing Inspector Gen of Police, Ibrahim Kpotum Idris in his recent brutally skewed selection or handpicking of police officers mostly drawn Southern and old Middle Belt Christian backgrounds for counterinsurgency operations in Northeast Nigeria? Why were there only ten Northern Muslim officers selected out of 167? Is the present central Government of Nigeria and its security forces especially the Army and the Defense Headquarters being sincere, transparent and accountable to Nigerians and members of the int’l community in matters of internal security in the country especially the counterinsurgency operations in the Northeast?

Why have the present central Government of Nigeria adamantly refused to retire or weed out the country’s service chiefs appointed since July 2015 who have long outlived their usefulness especially the COAS who was statutorily due for packing or retirement since January 2016? Who and who is truly in charge of Nigeria’s Presidency; a ruling cabal or persons and personages of Retired Major Gen Muhammadu Buhari and Prof Yemi Osinbajo?

Signed
For: Int’l Society for Civil Liberties & the Rule of Law-INTERSOCIETY