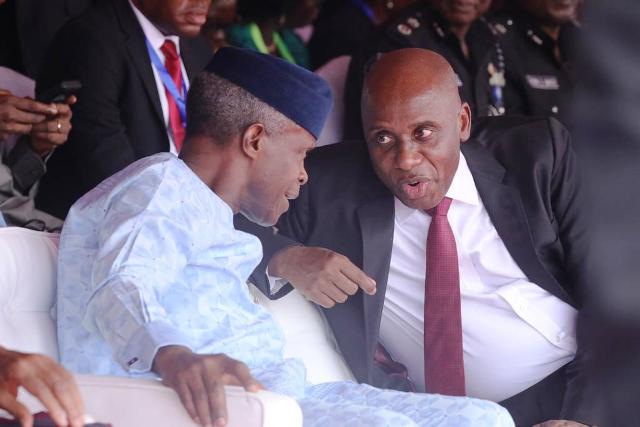 Minister of Transportation, Chibuike Rotimi Amaechi has said that about 5000 jobs would be generated from the railway Wagon Assembly Plant being built at Kajola in Ogun State.

Amaechi said the Plant is one of the gains of the Federal Government’s partnership with the Chinese Civil Engineering and Construction Company (CCECC) on the ongoing rail construction projects, particularly, the contract for the supply of rolling stock for the Abuja-Kaduna, Warri-Itakpe and Lagos-Ibadan rail lines.

The Minister spoke during the Plant’s ground-breaking ceremony performed by Vice President Yemi Osinbajo at the project site in Kajola, weekend.

He said, “To meet the increasing demand of both passenger and freight on the new Nigeria Standard Gauge Railway Service, the Federal Government awarded contract for the procurement of Rolling Stock, that is, Locomotives, Coaches, Wagons and contemporary Diesel Multiple Units to serve movement of passengers and freight on the Abuja-Kaduna, Itakpe – Ajaokuta – Warri train services as well as the ongoing Lagos – Ibadan Railway. It will also serve any railway service in the West-African sub-region.

“The Ministry of Transportation realizing the need of the advantage to set up this type of plant considering the potential need in view of the on-going rail projects in the country and the sub-region, encouraged Messrs CCECC to establish this plant. It is expected that the plant would generate job opportunities for Nigerians and as well facilitate the much-desired objective of the government towards the local content capacity development.

“It was in the pursuit of these objectives that the Federal Ministry of Transportation signed an agreement with Messrs. CCECC Nig. Limited in March, 2018 to establish this plant for the production and assembling of rolling stock, spare parts and maintenance equipment in Nigeria. Consequently, Messrs. CCECC conducted a feasibility study in which the choice of Kajola, Ogun State was arrived at as the suitable location for the project.

“This project is therefore a direct investment of Messrs. CCECC Nig. Ltd in the country and would remain as part of the gains from the contract signed for the Supply of rolling stock. This will be the first of its kind in Nigeria and the first batch of the wagons to be assembled from the production line of this plant will form part of the rolling stock for Lagos – Ibadan and Abuja – Kaduna Railway operations. Subsequently, other rolling stock would be produced as its production capacities increase.

“The project when completed would be able to generate about 5,000 jobs and in the long run Nigeria would be able to manufacture rolling stock for Nigerian use and for other African countries. More so, we would be able to conserve our much-needed foreign exchange, which can be deployed to other areas of development. Among all these, it is cardinal to mention that the sustainability of our railway modernization projects would depend on our ability to develop local capacity to construct, maintain and manage our new railway system.”

Commending CCECC for their effort and commitment to the project, Amaechi called for all necessary support to be given to the company to achieve success. “This project is germane to the railway development in Nigeria and CCECC should be given every reasonable support to actualize this investment.

While performing the ground-breaking ceremony of the Plant, Vice President Yemi Osinbajo hailed Transportation Minister, Rt. Hon. Chibuike Amaechi for his commitment to the project and all rail projects across the country.

“Let me commend the Federal Ministry of Transportation led by the very able and dynamic Hon. Minister of Transportation, Rotimi Amaechi or Chibuike Amaechi, (today he is Rotimi since we are in the South West) for the very hard work and commitment he has demonstrated from the inception of our rail modernization project. And also to the Chinese government, particularly the investor, CCECC Nigeria Limited for this significant and strategic investment.

“The vision you have shown and the initiative you have taken in the larger development journey of this great country will reap unparalleled rewards for you and great opportunity for our people.

He noted that the project is an important one for Nigeria, as it would not only produce, but provide support and growth for indigenous engineers and generate employment for thousands of Nigerians.

“This ceremony is not just another event, it is a historic turning point, for us, the railway is not just an alternative and comfortable mode of travel, it holds the master key to transforming commerce in Nigeria and across the continent.

“By linking our ports to rail lines and now, building the rolling stock locally, import and export business within and out of Africa’s largest market will be completely transformed. When completed, it is expected that the plant would produce some parts of the wagons for the Lagos – Ibadan and Abuja – Kaduna rail lines, but also for the central rail lines and to satisfy the needs of other rail operators within the West-African sub-region.

“The plant would offer an important platform for engineers, technicians, artisans and other professionals to gain the specialized skills required for the production and maintenance of rolling stock. This will invariably conduce to spin-off businesses in the region of operation in particular and across the country wherever rail networks are in existence. The plant is expected to generate about five thousand direct and indirect jobs.

Osinbajo also reiterated the Federal Government’s commitment to the rail modernisation projects, rail extension to the Apapa Port and the completion of the Ibadan inland dry port.

“We are optimizing the Lagos-Ibadan rail modernization project by extending it to the Apapa Port, the nation’s busiest port for the efficient movement of cargo from the port to various destinations. This will expedite import/export flows, decongest the ports, and depressurize our roads in the process.

“Also, we are putting all mechanisms in place to achieve the swift completion of the Ibadan Inland Dry port which will off-take containers and cargoes from Apapa port through the Lagos – Ibadan rail line.

Also, Managing Director of CCECC, Jiang Yigao expressed the company’s commitment to work with Nigerian authorities to achieve the country’s aim of modernising its railway.

He explained the motive behind the Wagon Assembly Plant project and the benefits that would accrue to Nigeria through the project.

“The concept of this Wagon Assembly Plant is to grow local technology and ultimately make Nigeria not only self-sufficient in certain components of locomotive rolling stock, but also an exporter. With the completion and operation of the Abuja to Kaduna Railway, Abuja Rail Mass Transit and work on other railway projects, the plant will play a pivotal role in ensuring the provision of wagons. The socio-economic benefits of the plant cannot be overemphasized. A number of youths will be employed and it will stimulate the creation of other ancillary jobs and bring development not only to Kajola community but the South West in general.

“The plant has the capacity to produce 500 wagons per year and will undertake key production processes like welding, assembly, painting, drying and testing. It has the capacity to produce open, container, flat, tank and box wagons. Nigeria is surely marching to greater development and CCECC will continue to partner with Nigeria in ensuring the technological development of the country.

“Today, the construction of the wagon assembly plant will open a new chapter of railway construction in Nigeria, which will help Nigeria speed up the railway industrialization chain.”

2018 Budget: Each Police Station To Get Just N1,017 To Fuel Vehicles Per Day – Media Group