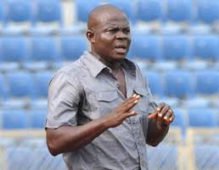 Coach Gbenga Ogunbote of Rangers International FC of Enugu has blamed poor pitch for the team’s 0-1 loss to Niger Tornadoes of Minna in an away match on Sunday.

Ogunbote told newsmen after the Nigeria Professional Football League (NPFL) game at Bako Kontagora Memorial Stadium, Minna that it was a difficult match, saying the pitch was bad.

a�?We lost the match because it was a difficult one, although the pitch is bad but Tornadoes is also a good side.

a�?We are not supposed to lose the game but however, we will go home and make amends in order to face our next game.

Ogunbote expressed disappointment over the football pitch which he said was below the standard approved by the League Management Company (LMC) for the NPFL.

a�?The pitch is so bad that you can hardly use it to assess a player, I wonder how it was approved for this match.

a�?This is not a pitch; it falls below the standard of LMC, so, I wonder how the LMC approved this pitch.

a�?I am sure that the spectators that watched this match live will attest to my claim,” he said.

Coach Hamza Abara of Tornadoes FC of Minna, however, said he was happy with the outcome of the match.

a�?I am happy with the 1-0 victory against visiting Rangers, I am simply overwhelmed,” he said.

Abara said that he did not believe in talking too much but that his record would speak for him. (NAN)

“Football is my life” – Abubacarr Konta, a young migrant from The Gambia, who is building a new life in Italy