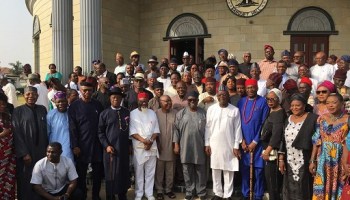 And The Freezing Of Bank Accounts Of Cjn, Hon. Justice Walter Onnoghen, By The Federal Government.

(1). The Southern and Middle Belt Leaders Forum (SMBLF) is a responsible organisation, made of prominent statesmen of Nigeria that have served, and still serving and contributing immensely to our great country, Nigeria.

(2). The information and statement about the siege on the neighborhood of the CJN originated from the CJN's residence, while this body was in a meeting at Abuja. We could not have manufactured such a statement if the alarm was not raised from the house of the CJN. It is therefore, not a fake news. This body only acted prompted to forestall any ontoward incidence of arrest or embarrassment on the person of the CIN.

(4). We want to further caution that any attempt to intimidate and harrass any of our members concerning this issue or in any other guise would be stoutly resisted.

(5). SECONDLY, We have also been reliably informed thàt the Federal Attorney-General & Minister of Justice, Mr. Abubakar Malami, SAN, has directed the freezing of Bank Accounts of the CJN, Hon. Justice Walter Samuel Onnoghen, vide a letter dated 14, January, 2019, titled: “Re: Request for Freezing of Bank Accounts subject to Investigation and Prosecution pursuant to Presidential Executive Order No. 6 of 5th July 2018, on the Preservation of Assets connected with Corruption”.

(6). We want to state that this inglorious exercise of freezing of accounts belonging to the CJN when the matter pertaining thereto, being embarked upon by the Hon. Attorney-General is completely unnecessary, and a further deliberate attempt to harrass and embarrass the high Office of the Chief Justice of Nigeria.

(8). The President, according to Vice President Osinbajo, could not have done anything to stop the prosecution of the CJN, by the Federal Attorney-General, who did not, as the Chief Legal Adviser to the Government, of the action he was going to take against the CJN. This is condemnable, considering the status of the CJN, who is the head of the third arm of government.

(9). Mr. Vice President went on to defend the ominous silence of Mr. President on the trial of the CJN, under the guise of the need for non interference of the operations of anti graft institutions in the discharge of their duties.

(9). We respectful appeal to Mr. President to direct the Attorney-General to stop the prosecution of the CJN in CCT, request then to follow the due process, because no one is above the law of the land.

97 thoughts on “Re: Threat By Efcc To Detain And Prosecute Chief Femi Fani-kayode And Mr. Yinka Odumakin,”