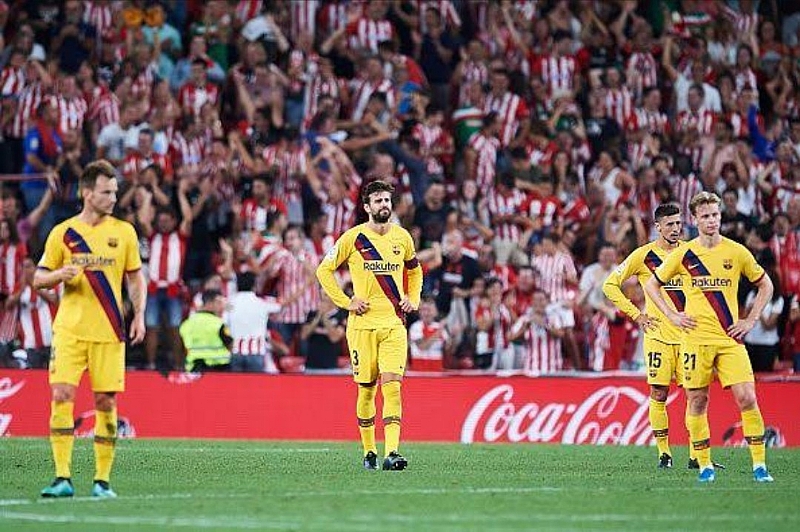 Real Madrid lost 4-3 to Real Sociedad at Santiago Bernabeu to crash out of the Spanish Copa Del Rey.

The visitors raced to a 3-0 lead but Marcelo and Rodrigo scored late in the second half to reduce the deficit before Mikel Merino added the fourth goal for Sociedad, Nacho scored the third goal for Real Madrid late in the match but it was too little too late as the hosts lost for the first time in 21 matches.

Barcelona’s turbulent week continued with a shock 1-0 loss to Athletic Bilbao to crash out of Copa Del Rey.

The whole week has been riddled talks of the row between Messi and Abidal and some fans have attributed the loss to the misunderstanding between them.

Inaki Williams headed in a dramatic 93rd-minute winner to send Bilbao into the last four of the competition.

For the first time since 2010 the Copa Del Rey final won’t feature Real Madrid and Barcelona.

Similarly, Zinedine Zidane has defended his selection in the loss to Real Sociedad after resting key players

“I put out a team that thought I could do well,” Zidane told reporters afterwards.

“I don’t think we were wrong with the team, but there is a rival who played very well and that has cost us.

“Here we are all together, when you win and when you lose.”

Real Sociedad, Atletico Bilbao, Mirandez and Granada will battle it out for a place in the final and ultimately a Copa Del Rey glory.