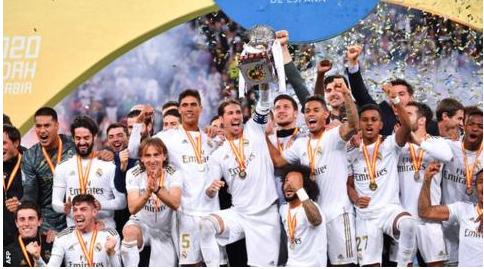 The regulation time ended 0-0 as both sides failed to muster any real chance to score.

The extra time failed to produce any goal for both teams.

Real Madrid ended the extra time with 10 men after Federico Valverde was sent off for a professional foul on Alvaro Morata, who was in a better position to score the only goal of the match before he was hacked down by the midfielder.

Sergio Ramos scored the decisive penalty to guide Real Madrid to their first trophy since the return of Zinedine Zidane.

Real Madrid have emerged victorious in all the nine cup finals they have played under Zinedine Zidane.

The Spanish Super Cup has a new format this season which allows the top two teams from La Liga and the Copa Del Rey finalists playing in a four-team competition in Saudi Arabia.

Real Madrid qualified for the competition because Barcelona won the league and finished runners up in the Copa Del Rey losing against Valencia in May.