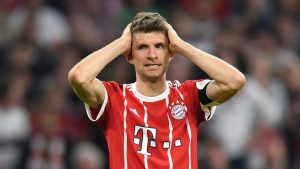 1. Madrid put one foot in Champions League final
Real Madrid have one foot in yet another Champions League final, although they might wonder how. Superb finishes from Marcelo and Marco Asensio overhauled the advantage Joshua Kimmich had given Bayern Munich, who missed a host of chances, and Jupp Heynckesa�� side have it all to do if they are to conduct a second-leg turnaround.

An attack-minded Bayern side almost broke through within 23 seconds when Robert Lewandowski wriggled free on the left before volleying a cross-shot that was too strong for Thomas Muller to turn home. Toni Kroos centred beyond everybody after finding space behind the defence, and at that stage, an open encounter looked on the cards.

It was 20 minutes before either side had another serious sniff at goal, though, with Jerome Boateng intercepting a dangerous Cristiano Ronaldo cross after a clever dummy from Luka Modric had sent him away. Then Dani Carvajal rifled straight at Sven Ulreich after the ball had bounced kindly on the edge of the area.

But it was Bayern, whose threat had been present but hardly convincing, who struck first. James Rodrigueza��s slide-rule pass sent Kimmich into acres of space down the Bayern right and, with Keylor Navas setting himself for a cross, the right-back fired inside the exposed goalkeepera��s near post.

Soon afterward it would have been two if Ribery had not miscontrolled when set up by substitute Thiago Alcantara. Mats Hummels headed over at the far post before half-time and Muller saw a shot deflected over. Real looked grateful for the whistle; then Marcelo, taking aim at the edge of the box, unleashed his bolt from the blue with an equaliser that whistled into Ulreicha��s far corner. There was still time for Robert Lewandowski to miss a headed chance at the other end.

A cagier start to the second half was blown open when Real completed the turnaround. It was a calamity for Rafinha, who gave the ball away to Lucas Vazquez and set in train a move from which Asensio, who replaced Isco at the break, coolly lifted over Ulreich.

Still Bayern made chances: Navas beating away Riberya��s shot and tipping another around the post; while, with 23 minutes to play, Muller somehow failed to make contact from two yards out with the goal gaping.

Ulreich saved from Karim Benzema on a rare Real counter, but Bayerna��s final chance fell to Lewandowski, who, incredibly for a striker of his ability, slotted wide with only Navas to beat.

Alexander Hassenstein/Bongarts/Getty Images
2. Real somehow find a way to win
Somehow this Real Madrid side finds a way when it matters. The three-peat is well and truly on, and while they rode their luck at times here, they will go into Tuesdaya��s second leg as firm favourites after a display that relied more on know-how than any explosive attacking quality.

Zinedine Zidanea��s selection was surprisingly conservative, with Benzema remaining on the bench while Vazquez started on the right. There was no place in the starting lineup for Gareth Bale, either, and in the first half, Real struggled to muster any kind of concerted threat. At times, they had to hang on, and they certainly were fortunate when Ribery and Lewandowski spurned chances to double Bayerna��s lead.

Real clearly have not looked invulnerable this season: their unsatisfactory domestic campaign is testament to that, and their near calamity against Juventus a fortnight ago confirmed the impression. But Marceloa��s raking volley was a reminder that they have cold-blooded winners all over the pitch, and it had the effect of emboldening Zidane, who replaced Isco with the more direct Asensio at the break.

He was rewarded with a superb finish by the 22-year-old, who stood up on a night when more-experienced campaigners were quieter. Modric and Kroos never really had control of the midfield, while Ronaldo, scorer of two goals here last year, hardly had a sniff this time a�� skewing one wild effort out for a throw-in. Their star performer over the 90 minutes was Raphael Varane, who put in an imperious display at the back; it said plenty for the way in which Real had to dig deep, but they will not be too worried about the manner in which such a seismic victory was achieved.

3. Bayern left to rue profligacy again
How painful this was for Bayern on a night when nobody, on the balance of play and chances, would have begrudged them a first-leg lead. Instead, they need a gargantuan performance at the Bernabeu. And it was impossible, as this match unfolded, to shake off the memory of the last time these sides met at the Allianz Arena.

Then, in a quarterfinal first leg just over a year ago, Bayern took the lead and missed a number of chances a�� including a penalty a�� and were punished twice, eventually falling short in the second leg despite a spirited comeback. They will need to go one better this time and will wonder how they came away losers here.

It was a particularly chastening night for Lewandowski, who missed at least two clear opportunities and might have done little for his prospects of the move to Real that has been mooted in some quarters. Bayern did little wrong for long periods of this match and will also reflect that, had it not been for Rafinhaa��s error, they might yet have gathered themselves to regain the lead.

What a blow it had seemed when Arjen Robben, who surely cannot have many more Champions League ties left in him at 34 and with his contract expiring, departed through injury with just eight minutes on the clock. Bayern had started at a high tempo, clearly looking to involve Robben and Ribery as quickly as possible, and although the Dutchmana��s exit appeared to check their stride, they rediscovered that vim after taking the lead.

The 15 minutes before Marceloa��s goal were not quite a spell on a par with Liverpoola��s whirlwind evisceration of Roma on Tuesday, but Bayern looked convincing: Thiagoa��s radar was set perfectly; Ribery fizzed with the menace of someone half his age; and with James also on song against his parent club, the chances arrived regularly. They continued to flow even after Real struck against the run of play; this was a good, exciting performance from Bayern, but it might not prove to be enough. ESPN