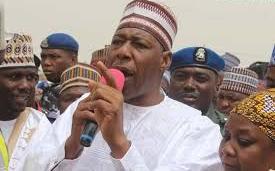 The continuous demolition of hotels and alcohol joints within Maiduguri city, the state capital of Borno state has generated lots of moaning and groaning among some sections of the society despite the fact that the action of the state government was targeted at responding to intelligence that such outfits have become hideouts, harbour and dens of armed robbers, bandits, cultists, ritualists, prostitutes and kidnappers posing security threats to the emerging peace in the state.

The Borno State Commissioner of Justice and State Attorney General, Barrister Kaka Shehu Lawan who is also the Chairman of the high powered Demolition Committee of Brothels and Alcohol Joints revealed that about 20 brothels, alcohol joints, and illegal hotels were destroyed recently for violating extant state laws that banned their operations since last year.

He said : “Three major hotels were shut down for using their facilities to accommodate underaged girls who were being drugged and sexually abused by adults. Some of the hotels were accused of promoting homosexual activity which is also outlawed by the government.

“Last year, the state government also carried out a mass demolition of 47 illegal hotels, brothels and alcohol joints which it said had become spots for all forms of criminalities and immoral acts.

” The state law prohibits the operation of all kinds of brothels and alcohol joints except in military barracks and other ‘mammy’ markets within the paramilitary barracks”, Lawan said.

The State Attorney General further explained that, ” proprietors of the 47 pleasure joints had protested the demolition at a press conference asking for compensation.”

It will be recalled that the immediate past administration had directed a special high powered demolition committee headed by the State Attorney General/State Commissioner of Justice, Barrister Kaka Shehu Lawan to list those that have certificate of occupancy over their lands for compensation.

The leader of the hotel owners, Amechi Onwudinjo, said they were unaware of the crimes and vices going on at their hotels and brothels.

When the government carried out the first demolition in June 2018, many of the hoteliers held a press conference to protest and asking for full compensation.

The government ignored them because most of them have no documents to back up their demands and none of the hoteliers came out to publicly protest the latest round of demolitions up to the time of filing this report.

Unfortunately, about 70 % of the hoteliers and alcohol joint owners could not forward their Certificate of Occopancy nor evidence of original and valid ownership of the land or property (buildings) rather they went to the press, calling on the state to reconsider its action and allow them to continue with their respective businesses as sources of living and employment to Borno State indigenes and also demanding for compensation of their demolished structures.

He said:” Reliable information at the disposal of the government also indicated that the resurfaced alcohol joints and brothels are now serving as a hideouts to criminals, deserting soldiers, ritualists and places where school-aged teenagers are abused sexually by both military personnel and civilians ,” Lawan said.

According to him, the existence and operation of these joints has forced concerned parents to raise alarm over the negative influence they have on their children and informed the redemolition exercise being carried out by the state government through the Demolition Committee across the Maiduguri metropolis and its environs to cleanse the city of all kinds of crimes, homicides and prostitution among others.

“There is a Borno House of Assembly legislation that prohibits the operation of alcohol joints, brothel business, and prostitution except in some designated areas where alcohol can be sold like the military mess or the ‘mammy’ markets in para-military barracks,” Lawan said

“Government have come to find out that such brothels have overtime doubled as criminal hideouts and that was the reason they were banned.

“We received a security report on the activities of such brothels and the State’s Security Council sat on the matter before we decided to take that action of demolishing all the illegal alcohol joints.

“Even the popular Lake Chad Hotel, located in the centre of Maiduguri, unknown to the government has been a den for homosexuals, child abusers, drug addicts as well as Indian Hemp sales and smoking joint. We learned that some unscrupulous elements have been using the hotel as a place for raping vulnerable girls and women.

“When we visited Lake Chad Hotel, we were shocked to find girls of school age of not more than 15 years of age smoking, engaging in sodomy and drinking alcohol. We were even shocked to find some married women who were taken to the hotel by strange men. So we had to seal the Lake Chad Hotel”, Kaka Shehu added.

The Chairman of the Demolition Committee noted that another hotel, the Royal City Hotel, was demolished because the certificate granted to the father of the proprietor stated that the land was purely for a residential purpose. He said the son, who is now the owner, went ahead in flagrant violation of the certificate to convert the place to a commercial joint.

“Apart from that, the proprietor of the same hotel had the guts to annex a public road that has been constructed and tarred by government and made it part of his hotel, thereby blocking the passage.

“The owner of the hotel also erected some kind of tower upon which he mounted some large speakers with which he used to blast sounds of music at night and constitute security risk and disturbance to the members of the community.

“We had it on a good authority that almost on a daily basis, people are being killed by bullet injuries due to sporadic gunshots by some drunken soldiers who usually patronise the place”, Lawan said.

The Chairman said another reason why government destroyed some of the hotels was that they served as “resorts for ritual and occultic activities”.

” Some startling discoveries were made during the arrest of 25 men involved in cultism at a hotel called Bagari.

“While making the arrest of the cultist gangs, our local security personnel found them with some weird calabash, jars of red substance which they confessed to the police that it contained human blood that they all drink as part of their initiation.

“The security personnel also recovered two huge live tortoises that they also use for their rituals. They were at the time of their arrest preparing to invite a senior cult group from a different part of Nigeria to come to Maiduguri to initiate some of their members into a major cult group.”

He said uniforms and shoes of school children were also recovered from the Bagani hotel.

Ali Banza and the 40 Terrorists

I Am The Best President Nigeria Ever Had.

28 thoughts on “Reasons Behind Govt Demolition of Hotels, Alcohol Joints in Borno State”